This Land is Ours! Jewish Sovereignty in All of The Land of Israel!

So many times I wish I could be two places at once, or wealthy enough not to have to work.  On the day of Second Annual Conference on the Application of Israeli Sovereignty over Judea and Samaria I was selling in Yafiz, Sha'ar Binyamin.  I deal with Arabs every time I work. 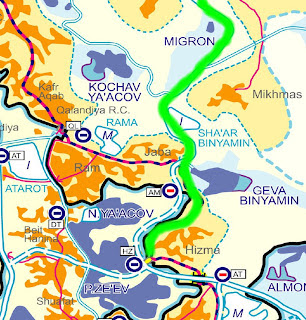 Places like Sha'ar Binyamin, a shopping center/industrial zone in southern Binyamin, just north of Jerusalem, is an example of what Jewish sovereignty in Judea and Samaria would be like.  It's ruled by Israel.  The Arabs who use the services and shop in the stores, Rami Levy, Yafiz, Shifon Bakery and take-out, Dusha-toys, the hardware store, natural food store, shoe store, bicycle store and more know who's in charge.  Both Jews and Arabs work in many of the stores, but it's clear to all that this is a Jewish ruled area.  It's a taste of Israeli sovereignty, a taste of with G-d's help future.

For an excellent summary of what I missed, read Arlene Kushner's article.

The timing of the conference was excellent, considering that the Levy Report about Israel's legal status in Judea and Samaria had come out just before.  It proves that the supposed illegality of Israel's presence in Judea, Samaria and all other Land liberated in the 1967 Six Days War is just rubbish.  For forty-five years already the Israeli Left and "the world" have been intensively brainwashing the Israeli public and politicians that we have no legal right to be here  But the truth is that their arguments are pseudo-legal claptrap.

This Latma skit gets it just Right.

Speakers at the conference included legal experts and Knesset Members from Likud, National Union and HaBayit Yehudi.  They all reinforced and agreed that there is no legal or practical reason for Israel not to annex all of the Land we liberated as a result of the 1967 Six Days War.

I have no doubt that the only way to true peace, not the flimsy farce called השלום Hashalom "the peace" is by Israel's fully annexing all of the Land and encouraging Jewish residence without restrictions.
Posted by Batya at July 16, 2012