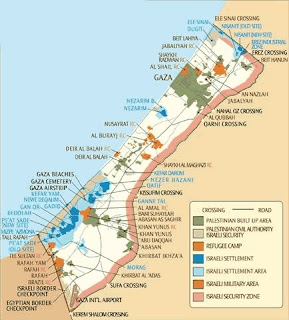 Tomorrow, the 13th of Menachem Av (Wednesday, August 1) marks the Expulsion from K'far Darom, Gush Katif. Former residents of K'far Darom and guests will meet in Shavei Darom, just outside of Netivot, where a core group of expellees from K'far Darom are building a new community, and then proceed to the Kissufim Crossing, which had been the main entry point to Gush Katif.
The Kissufim Crossing, named after nearby Kibbutz Kissufim, was the main entrance to Gush Katif. The Or Movement Negev Information Center explains the meaning of the kibbutz's name: The name "Kissufim" means longing, craving for the Land of Israel, good and sharing life. 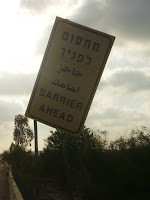 Since the Expulsion Gush Katif reunions at the Kissufim Crossing, where meeting friends had been a routine occurrence, are particularly poignant. We meet, and yearn for our land which lies beyond the crossing.
Every year we return to the same place. Every year we leave with a new layer of memories and understandings.
One of the times that we met our neighbors from K'far Darom for our yearly reunion at the Kissufim – there never has been a more appropriate name – Crossing into Gush Katif, I collected a a simple, but very dear to me, souvenir. I don't take a souvenir every year, but that year I wanted one, to help me remember the day.
We parked a short distance from the crossing and proceeded on foot. I honestly had no idea how far we were going to walk. I hadn't verified exactly what the schedule was and I feared that the army had denied permission to reach the Kissufim Crossing. We passed the "Closed Military Zone" signs and continued. I didn't was to get my hopes up, but I started to think that maybe, just maybe, we would reach the small part of Gush Katif still not fully abandoned. 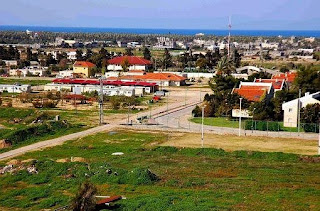 We walked towards home, on the road leading to Gush Katif. To our right, Gush Katif, under the (supposed) control of Hamas, and to our left, a Jewish farmer, working in his fields. Only a simple fence stood between him and the Gaza Strip. I was jealous of that farmer, who could gaze into Gush Katif and almost touch it. We reached the Kissufim Crossing. I hadn't fully believed that we would reach it until we did. I looked forward, into the Gush and it was hard to accept that we would not proceed further. I could see almost to the T-intersection, and from there I imagined the way home: a right turn, just a bit more, and then K'far Darom.
In reality I looked at the desolation around me. A few cement barriers were all that remained. Not even a small building was left in the place that had once been so full of life: people coming and going, waiting for rides. We read Psalms, cried, prayed and spoke of Gush Katif. 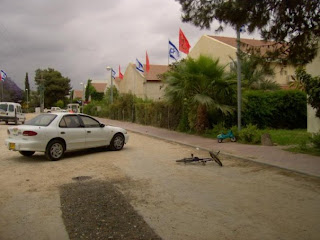 A young woman, a new bride, continued on in an attempt to reach home. And so she cried out to the soldier who tried to stop her. My daughter asked me, "What is she trying to do?" I replied that she was trying to reach her home. "But she has a home, she is married. She doesn't live in Ashkelon any more (Interesting. An expellee apartment in Ashkelon isn't a real home, but an apartment somewhere else, but still outside of Gush Katif is a real home?) and..." I interrupted her, pointed towards K'far Darom and choking back the tears said, "Home is there. Never forget that home is there." Perhaps it was for that moment that we had come. Mixed emotions filled and surrounded everyone present. No-one wanted to leave, despite the shooting and the IDF tank that suddenly pulled up next to us. 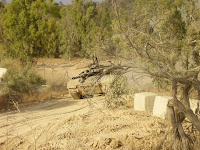 I wanted a souvenir. My eyes searched the area. Should I take a flower or a plant and dry it? Would a rock be better, or some earth? Then I saw the bricks marking the parking area. Most of them were still in place, waiting for us to return. A few were slightly askew, waiting for us to return and repair. I noticed also broken bricks, that were of no use. I took one as a souvenir. I didn't want a plant that had grown on its own. I took something that we had brought to Gush Katif, a sign that we had come and built.
G-d willing we will return and build anew the broken remnants.

Hadassa, your blog was written from your heart with class, love and sadness. Thank-you for sharing your feelings. I am going to share.

May the children of Am Yisrael return to Gush Katif in abundance and once again populate our precious land singing the melodies praising Hashem...

Hadassa, beautiful post, but so sad...
thanks for writing it here

Hadassa, your personal account pulled at my heart strings. As a Gush Katif expellee myself, I must admit that I haven't been back to the Kissufim crossing since our expulsion. It's simply too painful for me. May we merit to return and rebuild!

Shalom!
Thank you ladies, and thank you for whatever you've done to keep the memory of the Gush alive.
Sara, as painful as it is, I welcome any chance to get as close as I can to home, especially with my former neighbors. This year the meeting at the Kissufim Crossing was cancelled literally almost at the last minute. I didn't realize that we wouldn't reach it until the sun set as we stood on Tel Gama, looking through binoculars towards K'far Darom a few kilometers away. But I do understand your feelings. It took me a long time to be able to read Shifra's book (Grains of Sand: The Fall of Neve Dekalim) straight through. She brought it all back: the good times, the tragedies and the Expulsion itself.
May we merit returning to all of our Land, from Yamit to Jerusalem to the northern Shomron and beyond.
Tu B'Av Sameah and Shabbat shalom!