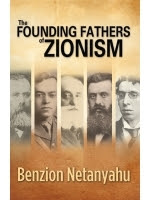 "Part 1" refers to the fact that it will take me more than one blog post to review the late Benzion Netanyahu's "The Founding Fathers of Zionism."

Let me start by admitting that I made a terrible mistake.  I should have had read the book immediately.  The book was sent to me for review before Netanyahu passed away, and while reading it I realized that I had some questions for him about the book.

It's no secret that Professor Netanyahu was a Revisionist, not a Labor Zionist.  He was a follower of Ze'ev Jabotinsky.  Netanyahu chose five Zionist leaders, most who are left out of the books written by the Labor Zionists, who ruled and dominated Zionism and the State of Israel until recently.  That statement of mine isn't totally true.  In very recent decades the Labor party and those with similar ideology have not held political power all that much, but they still control the media and the universities.  It was media pressure on his son Prime Minister Binyamin Netanyahu that caused his first turn as PM to fail.

The elder Netanyahu was not a politician.  He was an uncompromising academic and ideologue.  He was also a surprisingly good writer.  Unlike most serious history books, I found many parts of it unexpectedly fascinating to read.  To make things clear, the book was not written as a book.  It's made up of a series of articles about the five Zionist leaders.  The reader learns a lot of history but not all that much about the leaders as people.  There's nothing personal in the book.  We don't hear about their wives and children.

The closest thing to "personal" is when Netanyhau relates how they discovered Zionism.  Unfortunately, although we hear the stories about Leo Pinsker, Max Nordau, Theordor Herzl and Israel Zanguill, we're never told anything about Jabotinsky's early life and how he became a Zionist.  IMHO, that information is lacking.  To fully understand the men included we must know how they got the the Zionist idea.

If only I had read the book before Netanyahu had passed away, I would have used all of my connections to try to meet him and ask him to add an introduction to the Jabotinsky chapter giving that information.

I have something else to admit.  Even though I "have been a Zionist and davka in Jabotinsky's Betar Zionist Youth Movement" for over forty-five (45) years, I must that as I read the book I discovered how little I really know about Zionist history.  For me personally, the book has proven to be a very great educational experience.