The Anti-Government Agitators are Out of Control

Just before traveling to the states I went to the Jerusalem branch of Bituach Le'umi, National Insurance to attend a seminar about my rights as a senior citizen.  While waiting on line to get in, undergo the standard security check, I overheard the guards talking about the damage discovered in other branches.  This was after Moshe Silman had set himself alight, and the faux "social justice" mobs had taken their revenge on Bituach Le'umi.

I'm not going to say that all decisions of the Bitu'ach Le'umi are correct and speedy, but destroying a branch and all of the documents and files certainly won't help anybody.  It's a criminal act, and the police should arrest all involved.

If the leaders of this movement were really responsible, serious and cared about others, they would have taken a strong stand against Silman's horrid, fatal act.  They should have admitted that they have gone much too far. Instead, they have sympathized with him and now another person has done the same suicidal action, self-immolated.

50-year-old man in serious condition with burns over 80% of his body; 5th self-immolation comes ahead of Moshe Silman funeral.  Jerusalem Post 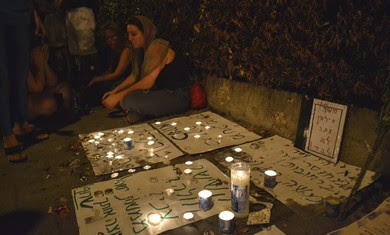 
Killing oneself as a political protest isn't a Jewish concept.  Suicide for any reason is forbidden.  The Israeli media has been promoting the faux social justice sic movement from its beginning last summer.  Israeli TV even cancelled scheduled programs to broadcast the entertainment at the demonstrations.  It's clear that the anarchists have very powerful backers.

The anarchy they promote endangers Israeli law and democracy.  The "me" and the "I want" philosophy are illegal and immoral.  IMRA reported that Israeli holiday homes owned by people who live abroad are being taken over by squatters.  If the owners are unaware of the squatters for the first month, it is extremely difficult to remove them.

There has been a totally preposterous proposal by Jerusalem secular Leftists associated with the faux social justice movement to try to force those who own holiday homes to rent them out to those looking for affordable housing when the owners aren't using them.  It makes no sense at all.  Why should people allow strangers into their homes to use their belongings?  We all must learn to live within our means. Sometimes you can't afford to live in the neighborhood or city you want. And you can't afford to buy what you want either.  That's life.  No country gives you all you want.

One of the things that we heard at the senior citizen lecture was that Bituach Le'umi doesn't cover all expenses, and we must have additional pensions.  I wish I had understood that decades ago when I was just starting to work.  Now I have to live on much less.  That's life.
Posted by Batya at July 22, 2012

Batya right on! This is your best posting..you are so correct. The agitators are paid to destroy our economy and turn Israel into a welfare state.

The organizers must condemn each and every act of self hurting and those who do criminal acts...burning down government buildings, be prosecuted to the full extent of the law.

Bituach Leumi, like US Social Security is a Ponzi scheme. It certainly doesn't help that Bituach Leumi is an over-bloated bureaucratic wastepit, like the majority of government ministries.

One of the most elementary causes and symptoms of Israel's social economic malady:

Government spending is equivalent to 44.3 percent of GDP. The budget balance has been in deficit, with public debt corresponding to over 70 percent of total domestic output.

What's urgently needed in Israel is to dismiss half to 2/3 of the government employees, ministers included. Then it will finally be worthwhile working hard for our money in this country.

Belated wishes for a happy TFD. Think about that when you struggle to pay your next makolet bill.

Miriam,thanks
Shy, they're all ponzi schemes. That's teh way all the insurance businesses work whether private or govt. The more children people have the better for the system.

How did you ever assume otherwise? Are you equating pension funds with insurance? They are not the same. Even pension funds are not designed to fail in responsible circumstances.

Not so US Social Security and Bituach Leumi.