Re: The Ulpana Neighborhood "Evacuation," I Don't Know What Makes Me Saddest

My thoughts, some at least, about the forced evacuation of homes in Beit El's Ulpana neighborhood are very sad.  I must admit that I didn't join any of the demonstrations.  It's not that I don't believe in demonstrating; it's just that I don't trust the organizers.  I don't/didn't think they were ready to risk all for the cause.

Apparently there were government orders to keep the children away.  The pictures look sterile and dead.  The silent protest included letting the government workers do a lot of the packing.

It's hard to sort my thoughts into clear prioritized reasons.  Listing as "1, 2, 3..." means that one is either the most or the least upsetting.  I guess I'll write them in "bullets," rather than number them. 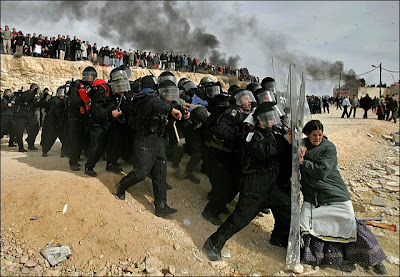 I feel so sorry for those who actually believed that the could beat Bibi's government.  The coalition is ninety-four out of one hundred and twenty Knesset Members.  Bibi has each held tightly.  If they move too far, they're out.  Yes, that's why I don't vote Likud.

Shalom!
The saddest part is that they didn't put up a fight. Better to fight and loose than to go out quietly, acquiescing. And yes, the people of Beit El should have foiled the government's plan not to have any "upsetting" photographs. I hope they don't expect the government to provide them with a real house any time soon, if ever.

**sigh** A poignant sad blog Batya. What can I say? You are right on all counts. Since the expulsion I've never felt the same about this country..... Vote Likud? Who would do such an idiotic thing. My heart goes out to those poor families, who like my many dear dear friends from Gush Katif were relocated today into cardboard homes. Many from the Gush are now scattered throughout E'Yisrael STILL in caravans.....And we won't mention the number of those poor folks who have mental health issues; got divorced; had children leave the derech; etc. I'm off to ZZZZZZZ after our latest barrage of Grad missiles tonight.

You want my honest reaction?
I just am INCENSED that this unholy government is getting away with even more uprooting !!!

If 2005 Gush Katif was not enough , this policy of injustice has to and MUST end .

This leadership needs to understand something and they have to understand it clearly that the Land of Israel is Holy and it is God's Land . It is NOT their land for them to unashamedly uproot their own brethren that want to live and live in the land they have every God given right and promise to live in .

This heartless and unjust government needs a wake up call and a rudely divine one at that if they believe they can continue to evict and destroy people's homes, families and .... lives .

I wonder what they would feel if anything ?

I really don't want write on because I would not hold back ....

It is awfully sad ... But there will have to be a nekoma of sorts ... Min haShomayim of course. I believe there is a heavenly 'sifting process' going on, to weed out the undeserving. The Erev Rav will either reverse their ways or disappear eventually.

I feel that while its despicable, I think they took the correct course. Let's not see the enemies of the Jews gladden their hearts at the sight of Jews fighting each other. Israel needs unity!

And this despicable stain will be wiped out by Heaven from the memory of the Jewish people and all who made it happen will answer for their deed in the next world.

Norman, that's the threat the govt uses. Sorry, but it's just plain bullying. It's like the husband who abuses his wife and keeps her silence by threatening divorce:
"You don't want people to see what an awful wife you are."

It's why I don't vote Likud, either. I'm so sorry. But the loss belongs to all of us, so I am sorry for myself, for our people, and for our nation. A very sad day.

It's why I don't vote Likud, either. Another national tragedy, foisted on the nation by a right-wing government implementing left-wing policy.

I hate the Likud being blamed for the wickedness of one rasha who has stolen the party. Bibi is not the Likud and he does not represent the party ideology.

Bibi is for Bibi and that is all he is for. The only thing of value to that megalomaniac is his own power. I can also assure that he is not a nice person in private. He's suave and he's charming, because that's the way to influence people, but he's not gracious in any sense of the word. I know people who've worked with / for him and I've personally seen how he's behaved towards them. You can tell a lot about a person when you hear their shouting coming through the cellphone next to the ear of a person standing near you and on that basis I can tell you that Bibi is not someone you want to work with.

And think about the famous incident with the press conference after his meeting with Barack Hussein. While as Israelis we can be justifiably proud that he bearded the lion in the lion's own den, we can also look at the event dispassionately and say that this man is such a schmuck he doesn't care to whom he's rude, or where.

So please, people, don't blame "the Likud," which has been fighting Bibi as much as it can, for the evils perpetrated by a wicked man who's hijacked the party. Give "credit" where credit's due; Bibi is to blame for Ulpana.

Eliyahu, I've known the Likud and pre-Likud for over 40 years. You must differentiate between the Likud party and the voters. Bibi is the party; he controls its internal court and officers. The fact that there are MK's with different policies is just to help bring in more voters.

It's sad, tragic really, that a man with Bibi's knowledge and talents has made the critical mistake of "going after the Center" and not being a principled idealist.

"The Likud" as you call it isn't fighting Bibi; they are enjoying ther perks of power.