Here we go again, but this time the Israeli Prime Minister has so many Cabinet Ministers and MK's in his coalition, it really doesn't matter how many don't follow his orders.


Channel 2 News reported that Prime Minister Binyamin Netanyahu's men made clear to the ministers and deputies that if any of them vote in favor of the Regulation Law, they will be fired from the government.


Netanyahu isn't leaving much to chance. He has become a very competent, effective and wily politician. This isn't the same Bibi who had been hounded out of office earlier. The Bibi who came back is a real power house. Nobody should ever underestimate him, nor trust him.

Please don't forget that Netanyahu has a very large comfy cushion of safety for his coalition.  He is ruling over the largest peace-time coalition ever 94 out of the 120 Knesset Members are in his government coalition.  So even if he fires a few ministers and there's a breakaway group from Likud, he's still strongly entrenched.  The few Ministers who are either away on official business or have threatened to vote their conscience aren't really needed.

By negotiating such a large coalition Netanyahu has effectively built himself the tools for a form of dictatorship. This may sound extreme, but for all practical purposed there isn't a real opposition.  Netanyahu's Government policies are too similar to the official opposition head Shelli Yachamovitch of Labor who's party is terribly small.  The only other non-Arab political party in the opposition is the National Union, even smaller than Labor, but at  least it has a very different platform and ideology. 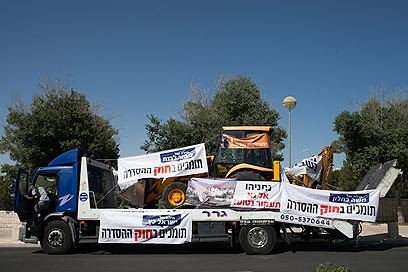 In the meantime, there have been daily protests, marches and a hunger strike supporting the Beit El Ulpana Neighborhood.  The police have been controlling the traffic to let the marchers march and disrupt the traffic flow to the maximum.  When people complain they're told to blame the protesters.  But that's another story....
Posted by Batya at June 06, 2012

bibi is right for firing ministers who do not do what he wants. a minister is there to carry out the wishes of the pm; if you do not want to do what the pm wants you should resign!
its not like he is throwing them out of the knesset.