What Does U.S. VP Biden Have Against Jews and Israel?

Disproportionate is the perfect word to describe United States Vice President Biden's hysterically emotional reaction to the building announcement for Ramat Shlomo when he was here in Israel.  A simple legal-historical research check would show that Ramat Shlomo is built in former no man's land never claimed by any country other than Israel.  Biden turned the announcement into a personal insult.  You'd think someone had raped his daughter. 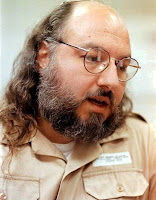 And now he revealed that he, Biden personally  vetoed releasing Jonathan Pollard.  Everyone knows that Pollard's sentence goes against all legal precedence.  It's proof that Jews can't expect justice in the United States.

I don't believe that Obama wanted to release Pollard and "Biden vetoed it". vice presidents don't do that type of thing. vice presidents are figureheads (and "understudies" for "just in case").

I think that both Obama and Biden agreed not to release Pollard, and Biden agreed to pose as the "bad guy" to make Obama seem like the "good guy". if Obama really wanted to do something, then Biden's opinion would not have made one bit of difference.

btw, since Biden is a total fool (as evidenced by many of the things he has said), one wonders why Obama chose him as vp. I have often raised the idea that he is Obama's insurance policy. as terrible as Obama is - if anything happened to him, then *Biden* would become president. isn't that enough to scare everyone into protecting Obama from all harm?

Leah, good point. Just the "good guy-bad guy" routine to get reelected. thanks

I hope that VP Biden doesn't have anything against Jews or Israel. Any administration in this country needs to be a blessing to Israel. http://483years.blogspot.com/

dave, sorry to break it to you, but I can't think of an American administration that was truly supportive of Israel. The American people yes, but not the presidents and State Dept.

I'm glad someone else noticed that!but I think it's getting worse. Obama is somewhere between a Radical Muslim and a Religious Communist.but he sure has changed now that it is getting near election, and Americans are objecting to his treatment of Israel.

He says waterboarding is a crime against humanity, but it's okay to blow holes in other countries neighborhoods to kill suspected terrorists.I think he has a religion of his own?

It seems the president that favored Israel more than any was, believe it or not; Nixon who was considered an american traitor[Irony?]

Azriel, I don't think that Nixon was pro-Israel. He was president during the 1973 Yom Kippur War when by following American advice we were almost destroyed. Tricky Dick with Henry -turncoat- Kissenger played us for fools.