I went into the BBC site to get news about Gadhafi's capture/execution when I saw this article sympathetic to the Arab terrorists Israel released in exchange for Gilad Shalit.  The video is worse than the article, but the BBC doesn't provide the option of copying the code.

I just went to Fox, where I got the video of Gadhafi's last moments.  It's not pleasant but you can watch it if you wish.

The BBC clip makes the terrorists Israel freed in exchange for Gilad Shalit into kind, thoughtful, sympathetic humand beings.  They totally ignored the barbarity of ther murderous acts the terrorists did.

As far as I'm concerned, when terrorists are captured in the act of attacking others, the most logical and humane thing to do is the let the police, soldier or civilian kill the terrorist as part of self-defense.  I we don't, then the terrorist will just end of being freed to kill again.  That is what has been happening in Israel.  Over one thousand convicted Arab terrorists were freed in exchange for Gilad Shalit.  I wish Gilad Shalit a good, healthy and productive life. I'm glad he's free and back in Israel, but those Arab terrorists who were freed and pardoned should really be jailed or dead. 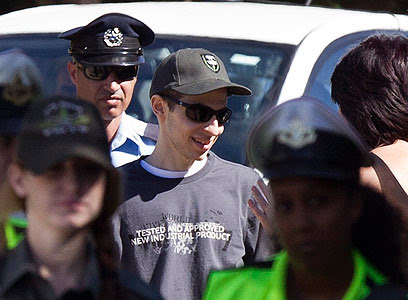 Horrible! The U.S. Media said , it was a U.S. drone, and french jet that attacked the convoy, and then the mob moved in for the kill. The Media here in the U.S. said also; Though we have helped remove a tyrant, our government leaders have no idea what form of government will take his place. Gee, Could it be the same as Eygpt? The Muslim brotherhood? Just another stab in Israel's back by the Obama administration !Those people are monsters!

I just read this back. Ironic, They both are monsters!

Syria said ;If the U.S , and U.N. interfere with their civil affairs, they will launch 1000 missiles at Tel Aviv. Netanyahu said ; If one missile is fired, Damascus will be the first city to be annihilated. That sounds kind of scripturally prophetic, doesn't it.?

We all knows who wins in the end?It is Israel! Whom should Israel's leaders fear ? man or G-D? Shalom

I would have described them as tried and convicted Arab terrorists.

Azriel, that's it. Those replacing Gadhafi are no better than he is.

We will one day be triumphant, but I dread to think of the battles and human cost.

Keli, yes, you're right, but unlike the BBC your sympathies are with us.