The Death Penalty for Terrorism Would Keep Us Safer 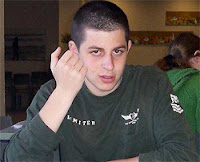 Expecting the Arab terrorists who will be released in exchange for Gilad Shalit not to resume terrorism against Israelis is as foolish as I would be if I hoped to get back the figure I had when I got married forty-one years ago.

Arabs risk nothing getting involved in terrorism, when they know they won't be executed, and they know that conditions in Israeli jails are excellent, including the opportunities for education.  And they even get a salary from the PA.  What are they expected to do in return once released?

Over a thousand tried and convicted guilty, experienced Arab terrorists will be released for one Israeli soldier, Gilad Shalit.


In return for Schalit, Israel will release 1,027 prisoners, some 400 of them prisoners serving long sentences for some of the worst terrorist atrocities in the country's history...

The Shalit family, with the support of the media, ran an excellent campaign to get Gilad freed, regardless of the cost, these past five years.  They put the blame and responsibility on the weakest link, the Israeli Government.  And Bibi's cabinet capitulated.

An Israeli official said on Tuesday that Israel had sent a letter of apology to Egypt for the deaths of several of its troops by Israeli forces chasing Palestinian militants into Sinai in August.

Many aspects of the agreement were not revealed, including the names of important Palestinian prisoners expected to be released. But Israeli journalists said after an intelligence briefing that Marwan Barghouti, a top leader of the Fatah group sentenced to five life terms and seen as a possible successor to Mr. Abbas, would not be freed. Mr. Meshal said that the total would be 1,027, among them 315 prisoners serving life sentences and 27 women.

According to Israeli television, Israel would first release 450 prisoners as Sergeant Shalit is sent to Egypt, possibly in a week. Two months later, the television said, the remaining prisoners would be released. None of the details could be confirmed officially. (complete article)

Yes, at the same time, the Binyamin Netanyahu's government apologized to Egypt for defending Israeli civilians. The Egyptian soldiers had been killed by the IDF because they hadn't stopped the terrorists from attacking Israelis.  Why should we be apologizing for that?

Back to my main point as mentioned in the title:
Israel has only executed one person in its sixty-three years.  That was Adolf Eichmann.  I can't promise that the fear of death would stop terrorists, but at least once executed, they can't be released to kill again.

Gilad Shalit isn't the only Israeli soldier MIA, missing in action, being held by the Arabs.  There are more.  And Eli Cohen's body still hasn't been returned for burial in Israel.
Posted by Batya at October 12, 2011

I am disgusted with the Israeli government, simultaneously with being thrilled that Gilad Shalit will be coming home. Maybe after Giilad is back, we can send drones in to where the released terrorists will be and decimate them all.
Not a good way to start a happy chag...got to get into a better mood.
As the dossim say, "a guten yontef" to you and yours!

ll, we sell ourselves too cheap. We're rewarding over 1,000 Arab terrorists.

"Uvda," proof's in the pudding, as the saying goes.