Americans Do Like/Love Israel. It's The State Department/Decision-Makers That Never Did

In Hebrew the expression is "nafal ha'asimon," the phone token just clicked.  I've been meaning to write this for a while.  I have written many times that the United States isn't really a friend of Israel.  One of my examples is that Jonathan Pollard has suffered and is still suffering more from the American"Justice," or Judicial System than enemy spies.  Another one of my frequently mentioned points is that the supposed military aid is just shopping coupons to be used only in American industry stores.

The American Government, the State Department, the Defense Department etc have never really treated Israel as a close ally.  There have been promises, especially during election campaigns, like the eternal "promise" to move the United States Embassy to Jerusalem and recognize Jerusalem as Israel's Capital City.    It has never happened, no matter which winning presidential candidate had promised.

I think that the asimon, phone token finally fell in my aging head.  The American people feel attached to Israel and care about it, so candidates feel they must show that they're pro-Israel to get elected, but once elected the Yes, Minister clerks run things the way they've always been run. 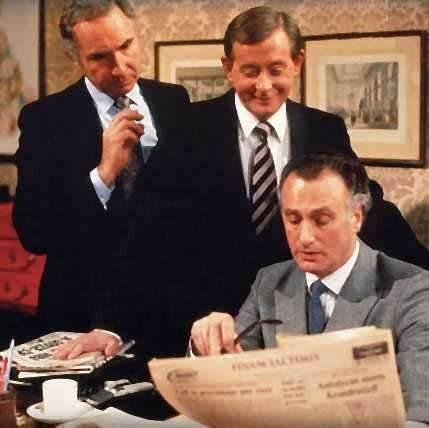 Will any of the "strongly pro-Israel" candidates do better trying to be the boss than  MP Jim Hacker?
Posted by Batya at October 09, 2011

Right on target with this post. The majority of Americans do feel connected to Israel. That is why politicians use Israel as a prop, a puppy in the campaign picture.

Virtually every politician includes his or her spouse and children in campaign pictures. Or if they have neither, they pose with a pet to prove they're good and decent people.

Israel serves the same purpose, especially in the bible belt where it translates into, 'I'm a good American. I salute the flag, go to church on Sunday and support Israel."


Support Israel...even as they encourage a peace process that only discourages Israelis from taking direct action against her enemies.

Obama is strange one though. He goes to the Kotel (loves Israel) then kowtows to Hamas for that "love."

Pollard committed a crime and made life difficult for persons like myself who work in government. He has likely served ample time for his misdeeds.

Now it is true that the State Department has historically been anti semitic. However, I see plenty of Jews visiting my office before they go off elsewhere.

It is true that those who do security checks have a bizarre obsession with Israel. I spent about an hour and a half discussing a country I never visited and have no relatives closer than second cousin in. My views on Israel have zero to do with my ability to do the job.

I find it amusing that when I am given a file and told its one of "your people" this means Isrealis, Russian, Poles,Ukranians, Balts, Turks, Jews from wherever or Guyanese. At diversity events I merely state my ethnicity as Jewish and find myself described as anything else.

Keli, so Israel's like a blue and white pet dog to be rejected once elected?

beakerkin, but Pollard paid up long ago for his crime, and people I know who had similar jobs long before him got the same third degree you're getting.

one must remember that the 3 Jews made the life sentence of Pollard:defence secretary Wineberger and the two judges.
Israel`s political death-agony is strangly connected with the half of the country`s(lefts)permanent efforts to surrender to her enemy.
There are leftists all ower the world, but I`m sure Jewish leftist is the Stockholm Syndrom victim.

a, I'm not sure all three are Jews.
And Israel turned Pollard in. don't forget.