A journey into Gush Katif 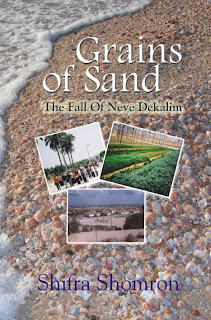 A journey into Gush Katif
by Sara Layah Shomron

This blog post is in response to a recent email I received which reads in part, “I was in Jerusalem a few weeks ago, for the first time in... too long to remember... and I saw Shifra's book nicely displayed in a store. I love that beach scene on the cover. It's rather sad that pictures and memories all we have now. I wish I could visit you there again. The beach at Nitzan just doesn't do it. Anyway, how is the book, and of course Shifra, doing?”

I thought other readers and potential readers would also be interested in knowing that Grains Of Sand The Fall Of Neve Deklim is on the radar screen.

As a pro-Zionist, historically accurate fiction novel written out of a deep love for Israel, "Grains Of Sand" “…vividly awakens dormant memories of the expulsion of 2005.” It is a powerful survival account written by Shifra Shomron, a teen raised in Gush Katif.

“Grains Of Sand” has worldwide distribution via Mazo Publishers. Here's what some readers of diverse ethnic, age, and religious backgrounds who live in various countries have to say:

• “I had the same experience, Tom, a real eye-opener by an GK insider - a teenager yet! I learned so much about what was actually going on, not only in GK, but also in the government, media and courts, versus the propaganda that was being spread then...and now.” Janet Clare, (Sept. 2, 2011).

• 2. "To get a more personal understanding of the expulsion
You should read Shifra Shomron's book, Grains of Sand: The Fall of Neve Dekalim. Shifra also keeps a blog My Voice In Israel, which would answer your question at least for one young woman..." Rachel Ann, (July 29, 2011).

• 5. "Right #2 One of those Neve Dekalim girls wrote of it's fall.
I'll give "Grains of Sand: The Fall of N. D." a recommendation too since Shifra Shomron's book is my prized possession for an inside look at GK life before and during the Israel government's crime against its own people. Thank G, Shifra, her parents, siblings and many friends are of great character and have coped with this tragedy. For most of us, the wound hasn't healed, because the govt. hasn't wised up. Never again should a Jewish family hear a battering at their door of expulsion troops!"
Hilltop Savta, (July 29, 2011).

• "This novel furthers the hope of understanding the massive injustice that occurred in 2005... Grains of Sand reminds us that real families and real citizens suffered in 2005 and continue to suffer..."
Menachem, (July 11, 2011).

• “…There is great pathos in the descriptions and the book is a 'must' for people everywhere must be educated about this sad part of our recent history in order to prevent it reoccurring….” Esther Revivo, (July 10, 2011).

• “…Shifra, though, goes beyond mere political commentary and even examines the psychology of denial of many of the soon-to-be expellees…”
Ra’anan, (July 3, 2011).

• “…I found the author's personal and convincing writing style very appealing and touching to read. Grains Of Sand gave me a real feel for the people through the book's characters. Now I wonder, how are the actual people coping?”
David, (July 2, 2011).

• “…This book moved me. It has stayed with me daily since finishing it. Everyone should read this book and learn about what happened to the Gush and work towards never letting it happen again anywhere in Israel.The flow of the book was great. It was a well paced and it was very difficult to put down.I could not recommend this book any higher.”
Robert Pepe, (June 30, 2011).

• “An absolutely spellbinding book. One of the best books I’ve ever read… You have to go out and get this book. You’ll see what was going through the minds of people before they were being expelled by their own fellow Jews and the biggest black stain on this country that I’ve ever seen…”
Eliyokim Cohen, book reviewed and excerpts read on fb, Jews News ,
(May 29th - July 22, 2011).

• "This is a very compelling book. There are not many fiction Jewish books out there (books that deal explicitly with Jewish themes) suitable for young adults. Grains of Sand helps to fill this gap. With some editing it has the potential to become a classic of English Jewish literature. This is a perfect text for a classroom setting."
Nehemia Stern, (10 months ago).

• “Elimelech Ben Efraiyam celebrated his Bar Mitzvah shortly after submitting his project: In the Shadow of a World Destroyed, Memories of an Expelled Teenager, based on Shifra Shomron's novel, Grains of Sand. He won for his region in the state-wide competition at Rider University in New Jersey. He was able to celebrate his Bar Mitzvah with a newly gained respect for his Jewish identity, his Land and his People because of the book and a personal connection with its author, Shifra.”
TZOMET FRIK 'N FRAK, (July 17, 2010).

• “… I recommend you read Shomron’s book – it’s a beautifully written, riveting work. Amazingly, Shomron was 19 when she wrote it. She’s a great talent and I look forward to reading her future work.”
Chas Newkey-Burden, (May 26, 2009).

• "Thanks Shifra, for keeping the heart and soul of Gush Katif and your lovely community of Neve Dekalim alive through your words. It is because of your efforts that we first learned of Gush Katif and the August 2005 destruction of these vibrant communities. Thanks for giving us a beautiful window into the place that was GK. For all those wanting to learn more about GK and Neve Dekalim, Shifra's book is a 'must read.'"
rainyseas7

• "Shifra, we're proud of you! You've brought a piece of Gush Katif to those who didn't merit visiting it and keep a bit of it alive for the rest of us. We're looking forward to the sequel when we return home to the Gush!"
Hadassa

• “…One of the very bright spots in this bleak picture is Shifra Shomron, a very talented writer whose lyrical style and depth are rare in one so young. I wish her great success.” Miriam Adahan, Psychologist, Author, and Founder of EMETT (Emotional Maturity Established Through Torah)

• “…And most of all, the psychological message was powerful. All at the same time, it informed me of the happiness of a regular family, moving onto the frustration and anger of that same family, all because of a government that could not sustain itself…”
Flamingnet book reviewer

• “…I believe this book is of value to all readers, since it shows what can happen when political corruption is allowed to overrule the rights of ordinary citizens - even in a democratic country….” L. Sapir, (April 25, 2007).

• “ …Ms. Shomron provides a single, yet telling perspective, that enlivens integrity in us all.” Leanne Olson, (April 9, 2007).

• “…Grains of Sand reads like a young adult novel with a religious orientation, but it is intended for a diverse readership that seeks to deepen its understanding of Gush Katif life. The straightforward, third-person narrative, interspersed with diary entries by the heroine, takes the reader through the ups and downs of the community: the idyllic, happy, tight-knit religious home and community life of the residents; the terrifying intifada that claimed many Jewish lives there; the struggle to enjoy life amid the constant threat of mortar attacks; and the fears and doubts of the community in the year leading up to disengagement....”
Orit Arfa, The Jerusalem Post, (Aug. 16, 2007).

• “... In the final pages, you will find your cheeks wet with tears as you finish the book - fiction that so tragically became fact. Read it - and remember!”
Dvora Waysman, The Jewish Press, (July 4, 2007).

As for Shifra, she’s blogging on her site My Voice in Israel, teaching adults English, enrolled in a MA English literature program and continuing on…

Be sure to also check out my blog piece about the Gush Katif fb pages, "Authentic voices from Gush Katif"
Posted by Sara Layah at October 26, 2011

Thanks so much for posting this. Grains of Sand is the only truly genuine book about Disengagement and the destruction of Jewish Gush Katif. No other book tells the story from the eyes and hearts of those who were expelled from their homes for no reason, other than the fact that they're Jewish.
This is the real thing.

Shalom!
Batya, it's the only real thing in English. More than several residents and "infiltrators" (meaning supporters who evaded the roadblocks and lived in GK for months, some of them in tents, all in overcrowded conditions) before the expulsion) have written wonderful accounts in Hebrew of Gush Katif and the horrific destruction.

Hadassa, thanks for the info. Since I don't read much Hebrew, I can't give that information. How about listing the books.

Posted a short portion and a link back, thanks.

Shalom!
There's a children's book "Ayal v'HaSandal" by Ruth Etzion from Morag, which has deeper meanings that parents will understand whereas young children will absorb them.
Two "infiltrators" to K'far Darom wrote books of their experiences. You have to like reading diary-type books in order to enjoy them, although they don't focus on themselves. "B'Ohalei Darom" by Yossi Ben-Shahar. "Sipuro Shel Meshubach" by Meir Goldmintz. There are others, but I haven't read them so I don't want to list them.