Yesterday's workday was spent proctoring exams*, pre-tests for the Israeli English Bagrut, Matriculation Exams. There's a reason I wrote "exams" in the plural. To pass English, a student must take four separate exams. 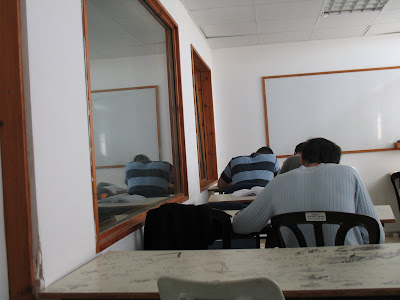 That's right, not one, nor even two, and there are three levels, known by their previous titles, the 3 point, 4 point and 5 point. Students must pass three different written tests and one oral interview test. For the interview test, they must complete a research project, because half the points on the interview are based on the project.
It doesn't take much imagination to understand that a hefty part of our measly four hours a week instruction are spent preparing for these exams.

Yes, all of this cost a lot of money... but it's for the students' benefit.

Only a few years ago, there was only one main testing season, the end of the school year in late May, early June. The winter testing was rarely used in schools, since testing, and its preparation, took up much too much class time. Most subjects were tested at the end of the 12th or 11th grades; generally one test, not more than two were given to 10th grade students, just to "break the ice."

Now both English and Mathematics are "modular." Students must pass a certain number of consecutive tests to have passed the subject matter. In Math, the curriculum requirements for the individual tests aren't connected, which makes things very complicated, if a student needs to go "up or down" in levels, like in the English 3, 4 and 5 points. English has A, B, C, D, E, F, G Exams and two levels of oral interview tests.

The testing system resembles Frankenstein's monster on steroids, but a lot more expensive.

We teachers are struggling to teach our subjects, but we find ourselves mired in the testing system.

Instead of the eduction budget going to teaching, it's going into testing, proctoring, grading, etc. Instead of being able to invest our limited teaching hours in teaching the subject matter, we must prepare our students for the tests.

Unfortunately, the final result is that today's students fail yesterday's exams. The new systems, teaching methods and curriculum are inferior to the old. Even worse, today's new teachers are the products of the new methods. And here in Israel, the politicians insist that only new, freshly minted, academically trained teachers can improve matters.

So far, the news is that no agreement has been reached to end Israel's longest teachers strike. The government refuses to admit that they're offering a reduction in salary (the hourly wage,) and bli eyin haraa, he should remain strong, Irgun Morim Head, Ron Erez refuses to accept such an outrageous proposal.

*Even though I'm totally in favor of the strike, the union members in the school where I work have voted not to strike but to observe sanctions and restrictions in what we do besides actual classroom activities.

I agree with you and have written to the Etni mail list months ago, suggesting a reduction in the number of exams into 2, with no repeat exams. There were a few responses to this, but on the whole, people were not enthusiastic. I hope this will change eventually.
Nira

I remember the letter, and it made me think.
Budger-wise, this multi-testing is a terrible waste. And then planning lessons for 12th grade groups, in which students don't all need the same test prep... a nightmare.