I know that not everyone in the religious garb, or uniform, is strictly religious. But this picture of Ran Erez, head of the striking Irgun Morim, teachers union, lighting the Chanukah Menorah in the Prime Minister Olmert's Office has many people talking. 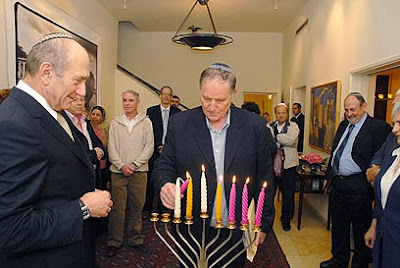 Take a good look.
Look again.
What's wrong with it?

No, it has nothing to do with the fact that Ran Erez is there for a photo op.

If you know anything about the Jewish Laws concerning lighting the Chanukah candles, you'll find something wrong. Comment please with your opinions on it.

A true Jewish fighter (a Macabee) lights the newest candle first (the leftmost candle in the picture). A true Hellenist does the opposite. I would assume that Ran Erez knows this, but he wants to honour his host Olmert, the king of the Hellenists.

There's more to the story.

Looks like he's using one of the actual Chanuka candles [hanerot halalu -- kodesh hem] to light the rest of the candles, including the shamash.

Which, I meant to add, is not a very encouraging sign when our leaders -- whether knowingly or obliviously -- treat the holy as profane and the profane as holy.

Yes, using the wrong candle, or someone put the candles incorrectly, but even worse is:
He was blinded by the the flash of fame.
On TV, I could see that Olmert's "director" set it up like a Bar Mitzvah, where the guests each lit one candle.

There is a common practice to light candles from left to right, the left candle being the new one, but I don't think there is just one halacha saying that you need to place all candles on the right side.

And FWIW, in Israel, it seems almost accepted across different ethnic streams to light all candles, including the shamash, with an extra candle. Was Erez lighting the candle on the sixth day or the seventh?

Third, there are many public lightings that are only for show, especially when non-religious people are directing the event, in which they have no clue what to do, rahmana letzlan. There is also a halacha saying not to embarras one's host, so we are missing the context to this picture.

It was the 6th night. I really should have linked the previous post which gives the context.
It was a festive camera op.

So he lit the shamash before he lit some of the regular candles. I imagine being in the center of attention here confused him.

unless the candle had been given to him, and that was the state of the chanukiya

Tough being a celebrity. At home, we do it without all the fuss.