No Holocaust Survivors in My Family 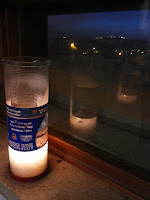 Since moving to Israel in 1970, I've always felt rather fish out of water during this season. It's Holocaust Memorial time, and it has always seemed that I'm the only one who doesn't have a "Holocaust Story."

Especially, since moving to Shiloh in 1981, where there are large community commemorations, and so many of my neighbors have family stories that could even be made into films, I feel left out. I wasn't raised at all with any family awareness of the Holocaust. It was something I learned about in Hebrew School and on American television. It was "newsworthy" because of the play the "Diary of Anne Frank" and the Eichmann Trial, both which happened when I was still in elementary school.

I spent my childhood in Bell Park Gardens, Bayside, NY, which was a garden apartment neighborhood/public housing development built for United States army/military veterans. Also the private and two-family homes in my neighborhood were built as part of the same program. None of our parents, to my memory, had foreign accents; they had all been raised in the United States. Most grew up in the tenements/slums of Brooklyn, The Bronx and the Lower East Side. Moving to the new neighborhood in northeastern Queens was their escape from poverty and a chance to give us kids a new wonderful life.

I have friends of the same age, raised in very different sorts of New York, and other North/South American and European neighborhoods in which all of the parents were Holocaust survivors. You could say that we lived in parallel universes.

My grandparents were all born in Europe, my paternal grandfather from Neshelsk, Poland, my maternal grandfather from near Kiev, Ukraine, and both my grandmothers were from Rogotshov, Belarus. All of those areas were seriously affected (meaning that the Jewish communities were decimated) by the Nazis and their enablers during the Holocaust, so how could I have been so far removed from Holocaust awareness and stories?

All of my father's grandparents, almost all aunts and uncles, too, made it to the United States well before the Holocaust. He grew up in a large extended family on both sides. Only after I was married did I hear that two of my grandmother's sisters stayed in the USSR; they were great believers in their country, and since the war there hasn't been any contact.

On the other hand, my mother was raised without any aunts, uncles or cousins. Her parents were alone in America, and she has no idea what happened to the rest of her family.

After the war, no relatives searched for my grandparents on either side, and whatever searches they did for surviving relatives were unsuccessful. There may be distant cousins alive someplace in this earth, but I don't know them, at least not as cousins. When the big Russian FSU aliyah made it to Israel over twenty years ago, I told my family story hoping for some miracle to find long lost relatives, but I failed. My father's two missing aunts were called Milka and Nechama Brynien, born in Rogotshov, Belarus, and my maternal grandmother's family was the Vishnevsky's of Rogotshov, Belarus. From some old pictures, there probably were family members in Minsk, too, and other nearby cities. My maternal grandfather was Abraham Shankman, born an orphan, raised by grandparents without any siblings.

That's why, at least to my knowledge, there were no Holocaust survivors in my family.
Posted by Batya at May 06, 2016

My mother's family came from what is now Ukraine, not far from Odessa, during the time of the Russian pogroms. The way some speak of the Shoah it's as if there was never any previous genocidal attempts, or at least wholesale slaughter attempts. It has been calculated that there Should have been some 4-500 million Jews by now and the only reason there isn't is Because of wholesale slaughter. To focus on One event is to negate the history of mankind against the Jew.

It is interesting that, apparently, at the Wannsee conference it was brought up by one of the participants that because of assimilation there likely would be no more Jews in a relatively short time. So why bother. I'll admit, I Have wondered if the Shoah didn't actually preserve the Jews as a people. Nowadays, it is said, there are more observant Jews than ever before. Would this have happened if it weren't for WWII. No one can say. One thing IS for certain and that is the Shoah has created in the minds of many that the ONLY reason for the existence of the State of Israel is the guilt of WWII. THIS was actually a proposition put forth on NPR by Bob? Simon who said, Is there really a need for Israel. Instead, the emphasis should be Israel has always been the primary occupant of the land.

No holocaust ancestors in my ancestors either, although large chunks of the extended family were exterminated. Upon research, I discovered they were well off and had assets to lose by emigrating suddenly. Which seems to be the plan of the Nazis in their campaign of plunder. Ironically then, it was the materialistic, complacent, and gullible Jews who perished, while the poor and paranoid survived to reproduce. That is why I am both poor and paranoid (and a Zionist), the gene pool of the Jews was altered forever because of the holocaust. I suspect this sort of eugenics has been going on for thousands of years, causing us to be hypervigilant, flighty and clannish. And for all we know, it is the will of HaShem...

Sharbano, I really can't stand it when people say that we have a state because of the Holocaust, because it isn't true. The preparation had been going on for decades beforehand.

Gnarlodious, also too many Jews stayed in Europe because the rabbis told them to. The rebellious left...

Sharbano, the Shoah was different in that it was a prearranged, methodical plan to eradicate a whole race. If hitler, yimach shmo v'zichro, could have been able to wipe out the Jewish people completely, he would have. That's why the arrangement with the mufti, yimach shmo v'zichro. We all know that the bnei Yisrael have suffered throughout the millenia from pogroms, murders, torture, inquisitions, etc., etc., but that does not diminish one iota the horrific shoah.

Now, making a day in the month of Nissan, no less, for a memorial is an outrage. But, we know that those who created the 'state' are the same people who instituted this day, using the Shoah as a pretext for the creation of Israel and, thus, diminishing the connection the Jews really have to Eretz Yisrael. The average person, including most jews of today, know very little of world events and history and this was easy to make the world accept the creation of the State because of the horrific shoah. Anyway, the nations believed Israel would disappear soon. They can't understand that that won't happen ever - it's all m'Shamayim.

The countries that voted for a "Jewish state" in the UN Nov 1947, considered the vote a smokescreen, symbolic, because they were certain that we'd lose the war to the Arabs who were assisted by the British. Our victory was Gd's miracle a gift to us, like the victories in 1967 and 1973, and like the fact that an impossibly high percentage of missiles shot at Israel, whether by the Gazans, Syrians or Iraqis miss the target.