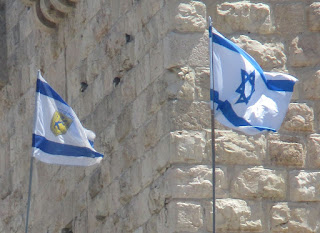 It's time for American Jewry and the State of Israel to take off their rose-colored glasses and look at the true picture of antisemitism and anti-Israel sentiment in the United States and recognize how it's only going to get worse.

I say that it is going to get worse, because it's much more prevalent among younger Ameridans than ever before. The norm, the accepted belief in American colleges and universities is that the State of Israel is an undemocratic apartheid state occupying Arab "Palestine."  They consider it a fact, not a myth or lie. That is what is taught to them by their experts and professors. The simple fact that there is no history of a country called Palestine, sic, no list of former presidents/kings/prime ministers/czars whatever doesn't faze them one iota.

The American and international concept of "justice" for the so-called "Palestinians" is to replace the State of Israel with a new country called "Palestine," sic. And they don't care if Jews are slaughtered, made homeless or anything.


WATCH: American College Kids Pledge Money to 'Wipe Israel Off the Map'
Satirical filmmaker Ami Horowitz went to Portland State University and asked people on campus if they would help raise money for Hamas.
Horowitz said he wanted to see just how far America's liberal students in the Pacific Northwest were willing to take the BDS Movement (Boycott, Divestment and Sanctions) against Israel. (foxnews.com)

Yes, I'm not exaggerating, nor being psychotically paranoid.

And if that's not disturbing enough, this story of a preteen being attacked should give you a reason to pack your bags for Israel.

‘Kill the Jew!’ 12-year-old boy brutally beaten at school in shocking hate-filled attack
Orit Avizov told a local news station that her 12-year-old was “physically attacked and verbally threatened” by one student who was yelling “kill the Jew” during the attack. (rawstory.com)

Push comes to shove, I don't think any country is better for Jews than the State of Israel.
Posted by Batya at May 26, 2016

Jews of America need to wake up as you say. They are blinded by comfort and materialism. Hashem is saying enough is enough, you are too comfortable here, this is not your gan eden. My husband and I are making Aliyah soon. When people ask us about it I ask them if they will make Aliyah. They say. No..I have a good job, I have to pay for this and that and maybe but I will have to live in Israel 6 months and America 6 months. This last Shabbat, four boys jumped the fence of our shul after everyone went home after Kiddush and confronted our Rabbi. When he asked them to leave one started to urinate on the wall. We have videos of all angles and in one you see the boys throwing rocks toward our Rabbi. He felt threatened and called the police but they never showed up and as of yet have not come to take a report. Of course there were those on the 'board' who said, 'well, they didn't start any fires or anything."

Anti-semitism is H's WakeUp Call to His people, the Bnai Yisrael! Even reading the above comment from Anonymous should be enough of a wakeup call because this is relatively new in the U.S., but the atmosphere worldwide has an impact, especially what is going on in 'indoctrination universities'. Reading the response by the foolish congregants of that shul shows you how stupid a people we can be.

The worst part ..when you try to warn family members they think your nuts. They respond with this blank sort of vague look - its astonishing that the collective memory is so short circuited. They all celebrate Yom Hashoah like its this distant event, not realizing that it was a relatively short time ago within the modern era. I think what they should remember is that if it could happen in Germany, it can happen anywhere. The Germans were so enlightened, modern and progressive Jews had fairly equal rights. They turned on the Jews when things began to go downhill for them. I am terribly afraid that is exactly where the US is headed, there are chilling similarity's (such as the fact that Nazism and the dehumanization of the Jews was an idea that was widely promulgated on university campuses and among the intelligentsia before it took off mainstream).
They need to wake up and realize the Shoah was not an isolated event and that history almost always repeats itself.
CSS

Emunah that is bad.
It is only going to get worse

Since this article mentioned Israel-bashing on college campuses, these web sites will not be off-topic:

Yes, I had to rescue it from the spam where blogger had relegated it.