One of the big adjustments for me as a mourner of a parent, a status that lasts a Jewish Year, is that I'm not permitted to watch my usual entertainment on the television, or my favorite movies--mostly old musicals-- on DVD. I've been listening to a lot of shiurim, Torah and Tanach (Bible) classes from the computer, mostly Matan where I study, and I have no problem with newscasts. 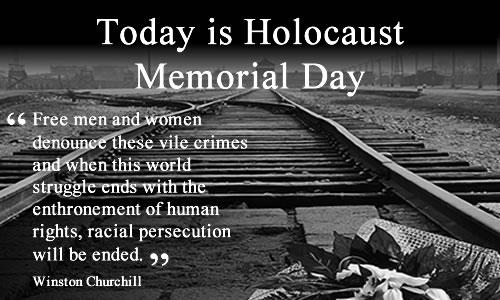 In Israel there are two days a year when all the television programs suit the restrictions of mourners. As according to Jewish Tradition, the day begins at night, so last night on the Eve of Holocaust Memorial Day there were all sorts of television shows about the Holocaust, survivors etc. One I found particularly annoying and political; it was on Israel's Chanel 1. Their news editors do their best to turn even the weather into complaints about the government, and they had an "expose`" of sorts emphasizing the difficulties many elderly "survivors" have financially and how some sort of fall between the bureaucratic cracks, because they don't fit the clerical and/or legal definition of "survivor."  They may have been too young or escaped too early or stayed in Europe too long to get German reparations which helped so many people financially. And now they are decades past retirement age, and like many elderly, have serious financial problems which they hope the Israeli Government can solve.  I changed channels.

I caught another program with interviews and films of survivors returning to their "former homes/countries" where they had suffered. There was also a Holocaust movie with Daniel Craig that I watched a bit until they had a crazy scene that meshed together Jewish wedding music and a battle.

Everyday fewer and fewer survivors, witnesses to the atrocities of the Nazis and too many others remain alive and/or capable of telling their tales. Yad Veshem and the Steven Spielberg Film and Video Archive are rushing to film and tape everyone who can possibly tell a first person tale of the Holocaust and survival. A friend of mine and her siblings recently accompanied their father back to Europe on a trip filmed by one of these groups.

The Holocaust was a very black and evil time in World History, and we shouldn't forget that it happened in advanced and cultured Europe. That's a message we must take to heart, and that is why I consider the terrible anti-Israel/antisemitic rhetoric coming out of even the most respected, academic and "open/Liberal" universities all over the world so troubling. The distortions in their thinking, teaching and ideologies are even more dangerous than  Hitler's rantings and Mein Kampf.

I see myself as a realist, a pragmatist. Do you agree?

Thanks
frightening, isn't it?

I must react to your reference to this rush to have remaining Holocaust survivors "tell their tales." Nothing wrong with it for private purposes, but insofar as defeating anti-Semitism, forget it.

Holocaust education needs to focus on the Haters, as this is the truly mind-bending part. Unfortunately, the Haters were early on airbrushed out and their motive recast as "obedience to authority" (the Jewish Stanley Milgram "proved" this in the social psych lab). Commonplace European Jew-hatred, largely based in Christianity, was impolitic to emphasize.

Consequently, even today's Israel-bashers who do view the Holocaust with horror have no idea that their "criticisms" are identical in spirit and form to the Jew-bashing of the 1930s, which entailed a similarly delusional concept of Jewish (now Zionist) power and world threat.

So yes, you can disseminate more Holocaust survivor tales, but don't be surprised if they are about as effective against the threat of a future Holocaust as "Nakba" survivor tales are at changing a Zionist's understanding of 1948 history.

Two authors who do dare point their focus on the Haters in the Holocaust are James Carroll and Daniel Jonah Goldhagen. Unfortunately, they are fringe.

On this I must disagree.
"Holocaust education needs to focus on the Haters"
I think it's the "good" passive people who let the haters push them around and do their dirty work. These enablers were those who were most dangerous and damaging for Jews. They were the ones who made the Holocaust possible. Today they have taken on the the faux morality of blaming Israel for terrorism.
"It's because of the occupation, sic."
They would have prefered our defeat in 1967, Gd forbid.