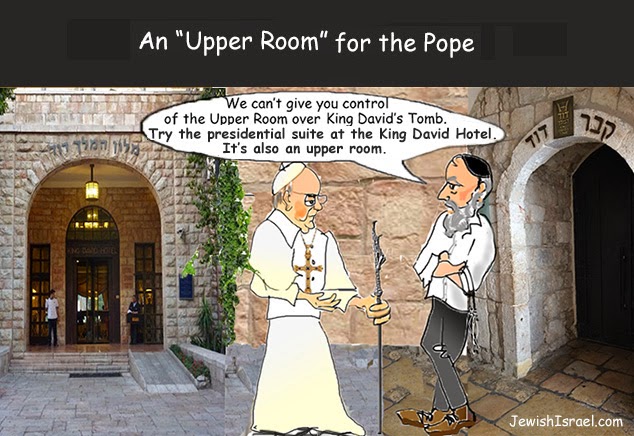 The intensity of the reaction to the current papal visit is likely due to the mixed bag of perplexing messages emanating from the “holy see”, as well as from the seats of government in Israel, and those from mouths of the media.

What the Vatican and international press are saying and what the government of Israel is not saying produces high anxiety in Israel, which is matched only by a level of anxious anticipation and optimism in Rome.

As of this writing, protests are organized, bloggers are busy, grassroots organizations are on alert, rabbis are being silenced and restraining orders have been issued. The international press is salivating in anticipation of an incident and the Israeli government has shifted into damage control mode.

JewishIsrael feels that it is high time to expose the sources of the provocative reports which so many Jews find upsetting. The truth is very telling, albeit not that surprising...more
Posted by Ellen at May 23, 2014

Ellen, thanks for posting this. To add to the continued indignities we Jews are suffering in our own country, the Kotel will be closed to prayer when the pope is in the vicinity.
http://www.jewishpress.com/news/breaking-news/kotel-to-be-closed-monday-morning-for-pope/2014/05/23/

The supposed kever of David is nothing more then a medievel shrine of zero importance except for those who believe its real. The real importance for the pope is the room below it. It is the original synagogue of the Netzarim (not notzrim) of the first century where the followers of Yehoshua (corrupted to the pagan lie named J*sus) prayed. So, if you just tell the truth to everyone, then problem solved. The whole problem is that "if" this Jew (before he became a roman pagan idol) was in fact MBY (which is transmitted orally even to this day within legitimate normative Jewish circles), then it would without a doubt prove both derechs are wrong as what they practiced was closer to sadducean/essene Judaism. Neither Pharisaic or Talmudic Judaism and certainly NOT Pauline xtianity. So I encourage those who are also spreading loshon hara against a Torah (not Talmudic) Jew, unawares, to become informed to factual history and not that of theologies of hatred on either side of the aisle. Why do I say, because of Michah 5:1 in HEBREW and the simple fact of reincarnation. It just could be true.

Shiloh, per your request and using your logic, here's the truth for everyone: Your jesus (or whatever you wish to call him is)is of zero importance except for those who believe he's real.