Behind Those Gorgeous Israeli Flags, We're Under Attack 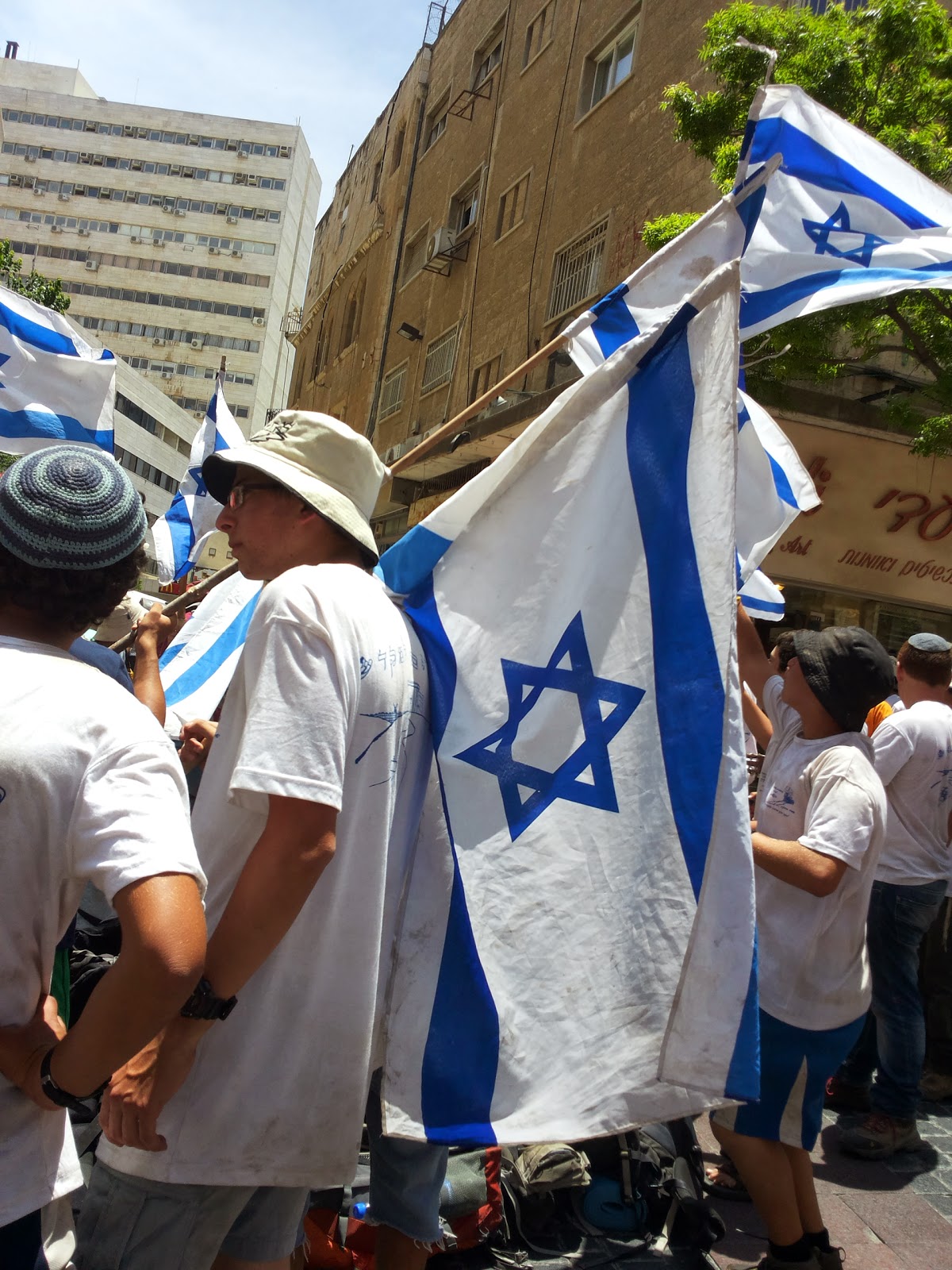 Today's the day after Jerusalem Day, 5774, 2014 and I couldn't resist posting lots of gorgeous pictures of Israeli flags on me-ander. That's the image we all like to envision when thinking of the State of Israel. And I wish that the state of affairs here in Israel was a strong and bright as those flags seemed being carried and danced with on the Ben Yehuda pedestrian mall in the center of Jerusalem.

Just a day before I ran into a friend who told me of her rather uncomfortable visit to Har HaBayit, the Temple Mount where paid Arab women are stationed all over screaming in Arabic whenever Jews came near. She said that Arab youth played irreverently and Jews were restricted from praying. Any sign of moving lips which could be construed as prayers, and the Jew would be roughly hustled away from the Holiest Place on Earth. Yes, to make it clear,  Har HaBayit, the Temple Mount, where both Batei Hamikdash, Holy Temples had been located is the Holiest Place of Earth for Jews. The Kotel which Jews tout as the "holiest" sic is no more than the outer wall and was more a parking lot where Biblical Jews left their animals, transportation of the time, when they went up to pray and give sacrifices.

Unfortunately, the Israeli Government continues to perpetuate lies and encourages outrageously insulting behavior, such as the recent visit here of the pope got away with two totally chutzpadik and undiplomatic insults which the State of Israel, the Binyamin Netanyahu Government should have condemned. The first was the entire itinerary which gave full recognition of the so-called Palestinian state sic as an equal with the State of Israel. The pope gave those the P.A. president Mahmoud Abbas, who has announced to all the world that he is joining with the officially recognized terrorists in Hamas, equal time and treatment with Prime Minister Binyamin Netanyahu. When the proposed itinerary had first been sent to Israel it should have been rejected. It would have had been better if the pope hadn't come to Israel at all.

Davka yesterday, while I was enjoying the Israeli flags waving freely and proudly on Ben-Yehuda Street, Jerusalem, Arab Muslim terrorists were attacking Jews and taking over Har HaBayit.


Arab rioters succeeded in violently shutting down the Temple Mount this Jerusalem Day to everyone except Muslims.
One police officer has been injured so far by a rock hurled by a rioter as security personnel battle Palestinian Authority Arabs on the Temple Mount in the first hours of the morning on Wednesday.
Masked Arab youths have been hurling stones and firebombs (Molotov cocktails) since the start of the morning, once again effectively preventing Jews and anyone other than Muslims from reaching the site. Their handy weapons are stored in piled caches in and around the Al Aqsa mosque, one of two Muslim houses of worship located on the Temple Mount. (Jewish Press)

Were they dispersed? Were they arrested? NO, but Jews were sent away. This makes a total farce out the Israel's victory in 1967.