Arab MK Masud Ganaim (Raam-Taal) appealed to the Palestinian Authority (PA) for help fighting the Jewish State Law, proposed by Prime Minister Binyamin Netanyahu on May 1, which would affix Israel's status as the nation-state of the Jewish people as a Basic Law.
Speaking to the terrorist organization Hamas's journal "Palestine" on Tuesday, Ganaim said the new law could have far-reaching negative consequences for the "Palestinian problem," and particularly for "Palestinian" citizens of Israel, referring to Israeli-Arabs. Arutz 7 complete article

Something must be done with the Arab MK's who show no loyalty to the State of Israel. 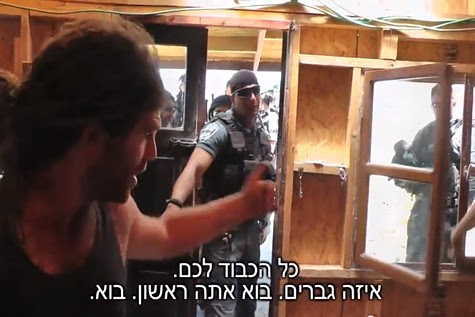 Frequent commenter to this blog, known as Shy Guy, sent me film clip of the recent destruction of a Jewish home, which may not look like the most luxurious or conventional.  But it was the home of a family of six in Ma'ale Rechavam.

Something is very disturbing when with all of the dangers that surround us and are within the Jewish State, the government wastes precious security resources destroying Jewish homes. They are so careful when it comes to the Arabs, but absolutely cruel to Jews. Yes, that does remind me of King Saul who murdered the Kohanim, Jewish Priests in Nov but let the Amalekite king live.
Posted by Batya at May 27, 2014

How much longer, Abba? How much tougher do we Yehudim have to be to fight our destroyers from within, off? They have been making the next generation of Jewish Israelis their sworn enemies ever since Gush Katif. I wonder what would have happened if they had tried that 10 years later, when the kids would be teenagers.

What angers me most is that they pick on the families with the smallest kids and pregnant women. They wouldn't have dared do that if everyone was adult and they had weapons. Eventually -- if this goes on long enough -- there will be no choice. Their backs are against the wall and the children are learning their lessons well, unfortunately.

This whole system has to go.

I'm sorry that I don't understand the Hebrew. Who are these people? How many families living in such a "home"? Is that any way to raise children? Why does that man have such hair? It seems very strange to me? Can you explain please.

CDG, yes, it is awful, but the correction must come from us. We must change government policy. Only when the politicians are more afraid of the Right than the Left will it get better.

Neshama, that's what they can afford. They planted and took loving care of their children. I'm not going to discuss their hair, because that isn't the point here. Jews must have more rights, and the security forces must take care of security and not "building violations," unless it's to make sure that Arabs have the same restrictions as Jews.

In the America of a day long gone now, this family would be called "pioneers." I don't imagine it was like the "Western" movie genre, the people with fairly decent hair and clothes and all that. The real pioneers had to make do with what they had (no running water, toilets, etc.). American pioneers have been celebrated in America until the 1960s at least. When Indians started speaking up, this celebration stopped.

All the more so, "normal" Israelis should celebrate people like this and help them. But, NOOOO, davka they mock them and abuse them. It's the opposite situation here - we are as close to being natives as one can get in this part of the world - but we allow the whole world to see us as criminal interlopers. Even families like this one.

I understood from the video that only one family lives/lived (I hope they will return) there. The others might have been there for moral support. I could be wrong. But it certainly is not a commune, or anything like that.

Resistance is indeed what is needed...from us.