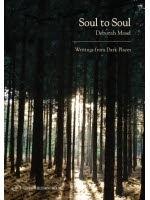 I was amazed at how quickly I read "Soul to Soul," by Deborah Masel.  Actually, I'm even more amazed that I had managed to read it to the end.  There are certain types of books I just don't have the kishkes to get through.  OK.  Call me weak, chicken, whatever you think appropriate.  A few years ago, I bought a book a friend had written about her son who had been killed in battle.  I just couldn't get through it.  It was well-written, but the problem was within me.  I couldn't deal with the subject of a mother writing about her dead son.  I can handle those conversations in person, but not that story in a book.

"Soul to Soul," by Deborah Masel was written while the author knew that she had incurable cancer. She chronicles the story, her story. Masel's written words are so strong, so compelling that I have no doubt that she was an amazingly charismatic person when alive.   I crossed that out, because she's still charismatic even  when her body is dead.  Her words keep her soul alive.  Yes, as I had mentioned earlier, on me-ander, she very much reminds me of Coffee and Chemo's RivkA, who also died of cancer.

In real life, I'm the type who can't "say goodbye" to a dying friend.  At least so far I've failed to do it.  A couple of years ago, when a friend was dying, word went out that she wanted visitors.  Yes, I did visit, but I could barely speak.  Words failed me.  We looked in each other's eyes and it seemed that we were communicating.  Yes, she spoke to others, but our communication avoided voicing the crucial issue... that it was most possibly the last time we'd meet in Olam HaZeh, This World.

Deborah Masel writes with such honesty, she blew my usual phobias away, at least when it came to facing cancer on the written page.

Today, with all the modern testing, all sorts of cancers are discovered on people which in the past must have had remained hidden.  Statistically, it seems there's hardly anyone who will escape at least some sort of cancer.  Breast cancer alone is now diagnosed in 12% of women.  Of course, most women survive it, but that still means that more than one in ten women will have some sort of surgery and/or treatment for breast cancer.  That's an amazingly high number, and that isn't the only cancer any of us can get.

RivkA was very upfront and honest about her treatments, symptoms and worries.  Masel is the same in her book.  It seemed like once women discussed varicose veins, wrinkles and greying hair.  Now they discuss chemo, radiation and breast prosthesis. (Some women I know have also chosen not to wear them, explaining that the discomfort outweighs the aesthetic advantage.) I've seen this also with friends who have been treated for cancer.

Deborah Masel was a teacher, a teacher of Jewish subjects.  She had many followers which doesn't surprise me.  She found great comfort in her Judaism and Jewish studies.  She had a loving family, many friends and followers.  May G-d give good health, strength and a multitude of blessings to Masel's family and loved ones.  HaMakom yenachem, may G-d comfort them.

"Soul to Soul," by Deborah Masel is an amazing book.  I definitely recommend it.
Posted by Batya at September 12, 2011