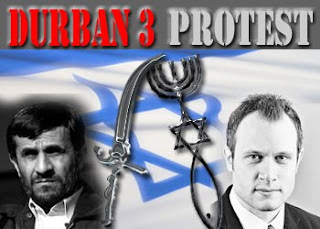 The Durban 3 protest of September 21st was supposed to be a mass rally involving dozens of major Jewish and Christian organizations, but things began to crumble as word got out that Calev Myers, the main organizer of the ISRAEL NOW Durban3NYC protest, is a "messianic Jew" and his organization, the Jerusalem Institute for Justice (JIJ), champions messianic Christian’s rights in Israel.

Jewish Israel explores the truth about Myers and examines the evangelical messianic web which almost managed to dupe American Jewish leaders and which did cause embarrassment to the Israeli government.

Israeli and Diaspora leaders need to ask themselves whether articulate evangelical advocates, such as Myers, are great defenders or destroyers (in a spiritual sense) of the Jewish state...more
---

Rabbi Sholom Dov Lifshitz, the Founder and Chairman of Yad l'Achim, has passed away

This is a great loss for Klal Yisrael. The directors of Jewish Israel had the honor and pleasure of meeting with Rabbi Lifshitz to discuss our work and we remain in regular contact with the staff of Yad l'Achim.

Jewish Israel's Rabbinic director Rabbi Sholom Gold admired "Rabbi Sholom Dov's immense dedication". Rabbi Gold had the opportunity to work with Rabbi Lifshitz in the organization Peyilim in 1955 and 1956. Rav Gold said, "At that time – long before the problem of Jewish girls in Arab villages or missionaries and cults - Rav Lifshitz was assisting tens of thousands of new immigrants and Jews from the transit camps." Rabbi Gold called Rabbi Lifshitz "a visionary who saw problems 55-65 years ago. He remained relentlessly and tirelessly devoted to his life's work, which was looking out for the safety and security of Jewish souls."

We hope and pray that the good work of Yad l'Achim will continue after this great loss.

Wow! It is a trmemndous loss that Rabbi Lifshitz passed on. May his memory be for a blessing. i remember when another rabbi- Rabbi Groundland, would come in to the seforim store I used to work for to collect for Yad L'achim. I was a new baales teshuvah at the time and I had no clue of the issues that plagued klal Yisrael. What an amazing organization truly built to bring back every neshama by showing them that each and every neshama matters.

Thanks for posting about both matters.
Rabbi Lifshitz was a great Tzaddik who saved many Jewish souls.