Chamberlain and Hitler, No Wonder The British Stymied The Zionists

No historic development should be seen in a vacum.  Everything is connected.  During the British Mandate, which was supposed to aim for a Jewish State, it was very clear that the British favored the Arabs and constantly sabotaged the Zionist aims and rights. 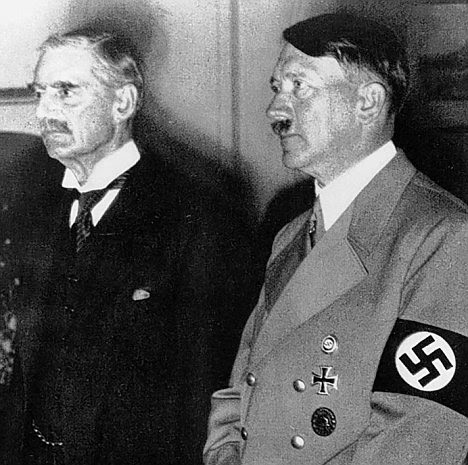 This shouldn't be a surprise considering that Britain's Foreign Minister Neville Chamberlain made every effort to appease and work with Hitler and the Nazis.

The appeasement policy was supported by many in Britain until German attacks proved it dangerous and based on fantasy.  But the British infatuation with the Arabs pre and post-dated it almost aborting the establishment of the State of Israel.
Posted by Batya at September 05, 2011