Life or Death, Nothing In-Between

The Jewish People is now in the pre-Rosh Hashannah/Yom Kippur mode.  We're trying to make amends to G-d, doing Teshuva, repenting, begging G-d to give us life, not death.

Life is an active, independent state.  Is it a blessing to be restricted, in need of twenty-four (24) hour care day and night?  Is the condition of former Israeli Prime Minister Ariel Sharon the "life" we're praying for?

When I hear that Israeli politicians are willing to make "adjustments" and just "annex parts of Judea and Samaria," I'm not comforted, reassured that it will be good for the State of Israel, the Jewish People and ארץ ישראל Eretz Yisrael The Land of Israel.


The Co-chairman of the Land of Israel Lobby in the Knesset, MK Ze'ev Elkin (Likud), said Tuesday that the Lobby's members would work toward bringing about the declaration of Israeli sovereignty over parts of Judea and Samaria in the course of this year.

The details, logistics of such a situation can only be described as a nightmare, one of those spooky ghost stories the worst of the science fiction genre.


For however long the Jewish State would survive such a status, it would be like the present "life" of Arik Sharon or worse.  Yes, that's the truth. It isn't very PC to say so, but I'm not in the "politically correct" business.  I blog to tell the truth as I see it.

We, the Jewish People, must enjoy a vibrant Jewish Life in the Land of Israel.  G-d ordered us in the Bible to take over the Land, destroy/banish the inhabitants, build Jewish cities and anoint a king to govern us according to G-d's will. 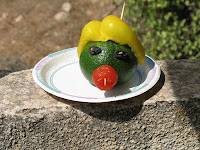 May the new year, 5772, be a wonderful year for all of us.  May G-d bless us, yes, us and give us LIFE, full, vibrant LIFE.  The prayers on the Rosh Hashannah Prayers are in the plural for the entire Jewish People.  Rosh Hashannah isn't the time to just think of ourselves.

May our leaders, those in power, be blessed with true, G-d given wisdom.

Jerusalem is not a settlement, but Israel's capital. I was reading the original British mandate from the league of Nations, still binding in the U.N.which gave Israel the equal right of ownership including the same mandate that gave the surrounding Arab right of territory. Has no one in the U.N. heard of the Balfour Mandate?. Of course G-D has given Israel her inheritance,and right of deed, not man. Shabbat Shalom

Azriel, in the "abridged history" the world knows, they leave out what we consider important.