It's worth reading this Tablet article about the girls high school in Maale Levona, or should I say about the students and alumni of the school.

The school was established after my daughters had already graduated high school.  Would I have sent them there?  I honestly don't know.

Many/most of the girls who had been arrested and stayed in jail for long periods of time during the struggle against Disengagement were students in Ulpanat Maale Levona.

My youngest daughter and her friends had done a hunger strike of sorts as an anti-Oslo protest.  Then the students in Ulpanat Ofra were in the vanguard of pro-Jewish Life in the Land of Israel.

Living in Israel, especially in the heart, the very center of the Land of Israel, Eretz Yisrael gives us all a different perspective.  These kids, unlike my generation, only know this Land.  I was a high school senior in my last days of school when Arabs threatened Israel with total annihilation, which resulted in the miraculous Six Days War.  The United Nations quickly fled; its peace-keeping forces sic withdrew the minute Egypt's Nasser ordered it to leave because he planned on invading Israel.  No country helped Israel.  Just G-d and people all over the world were in Israel's camp.  That's right.  Not even the United States.  All the world just waited with baited breath to see if Israel would be destroyed.

Thank G-d and G-d only Israel defeated its enemies and liberated, yes liberated our historic HolyLand.

These girls see and feel it.  You can also feel it from some olim chadashim, new immigrants. 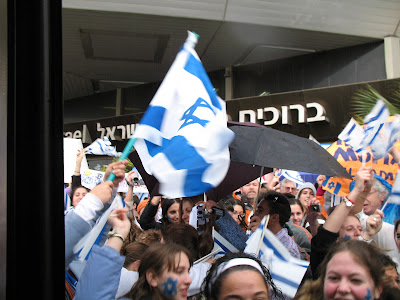 I don't expect everyone to understand.  I also don't judge the girls even when it comes to the actions I would never do myself.
Posted by Batya at September 08, 2011

Yaak, the one I linked to or mine?

Taking a stand on principle is something to be praised.

I have a lot of respect for those girls and their courage.

I have none for the Border Police who threw three Jewish families out of their homes earlier this week!

All of Israel could stand to learn from those children.