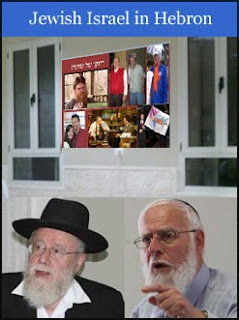 On September 14th, Jewish Israel gave a presentation to the Hebron community in the presence of Rabbi Dov Lior, the Chief Rabbi of Hebron and Kiryat Arba. "Crossing Lines: Profiles in Deception" addressed the missionary crisis in Israel.

Jewish Israel was asked to give this presentation following the July 2011 CUFI Summit in Washington where certain activists from Judea and Shomron met and were photographed with known missionary personalities. Updated information on Tommy Waller, Mike Isley and their missionary partners and affiliations was included in the presentation.

Following the presentation, the Va’ad of Hebron met and initiated a process to establish guidelines to govern their relationship with Christian leaders and organizations. It was made clear that the Va'ad will be following Rav Lior's position and expanding upon it…more
Posted by Ellen at September 18, 2011

Ellen, JI, I truly appreciate that you post your valuable articles on Shioh Musings. I think a meeting like the one described should also take place in Shiloh.

I'm sure JI would be happy to arrange for such a meeting after the Chagim. Will be in touch.