Why are Israelis "Nicer" Of Late?

There was an interesting piece in the Jerusalem Post Magazine.  I can't link it from the magazine, because it's of their "premium," for pay only online deal.  That's even worse than the New York Times, but like most of the good articles in the times, I found this one, The new, nice Israeli by Larry Derfner, someplace else.  Just google the title and author and you'd be amazed at what you can find for free.  I was able to get the photo that illustrated it from the JPost site.  I don't know who the photo editor is, but he/she has a sense of humor.  I can't imagine a less attractive or suitable photograph to illustrate an article that supposed to show how Israelis have gotten nicer the past couple of decades, than these two poorly dressed overweight ladies. 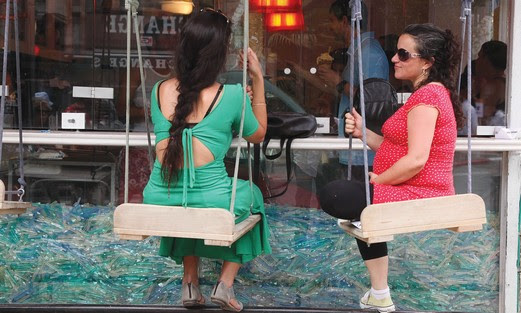 Derfner admits to being Leftist:


This nice, new Israeli flies in the face of a pet theory of the Left (with whom I identify politically) – that the continuing occupation and slide to the Right is having a coarsening effect on people’s personal behavior. This may be true in the theater, movies and novels, but not in real life, I find. Israelis have become more callous toward Arabs in general, but I doubt that an individual Israeli Jew is now going to be more callous to an individual Israeli Arab, and I see no evidence whatsoever that Israeli Jews are now more callous, on a personal level, to each other or to foreigners. What I see, over and over, is evidence of the opposite.

I wish Derfner would think a little harder about the differences in life here pre-1967 Six Days War and ever since.  He almost has it when he mentions the times he remembers that weren't quite so pleasant:


Why shouldn’t Israelis be happy? And if they’re happy, why the hell shouldn’t they be nice?

And that’s what’s happened – in the last 15, 20 years (except for four years of intifada and recession) life in this country has gone from hard to easy, from constricted to free, and Israeli behavior, logically, has gone from rough to smooth.
Emphasis mine

If you look at Derfner's "time chart," you'll notice that davka the "niceness" began a generation after the Six Days War.   And yes, the reason is exactly the opposite of what the Left wants us all to believe.  It's all very simple.  During the pre-State time and the nineteen years when we had Auschwitz borders, Jews were constantly under attack.  Our Capital City, Jerusalem, was surrounded on almost all sides by enemy Arabs; sniper attacks were frequent.

And the situation in the rest of the country wasn't any safer.  The Syrians used to Golan Heights to attack Israel.  The Golan overlooks Israel's pre-1967 agricultural land.

Judea and Samaria are next to, right next to Israel's coastal plain, known as "hamerkaz," the center of the country.  Prior to the Six Days War, these were dangerous border towns when Jordan was in charge. Yes, places like Rosh Ha'ayin, Petach Tikvah, Kfar Saba and Lod-Ben Gurion International Airport are a very short ride or hike to the old border.

Now think about it.  What has really made Israelis nicer, calmer, less likely to be stressed out nervous wrecks?  It's the fact that when the dust settled and the bullets stopped flying forty-four years ago at the end of the 1967 Six Days War we finally had defensible borders.

Yes, we were finally holding more of the Land of Israel, from the Golan Heights to the Suez Canal, from the Mediterranean to the Jordan River.  That physical, geographical security has "softened" your typical Israeli.  It also brought emotional optimism and financial wealth.  Prior to the Six Days War, Israelis were leaving in droves and the common "joke" was that "the last to leave should turn off the lights."

If we, G-d forbid, give this precious Land away to our enemies, there won't be any of us left to turn out the lights, because the Arabs plan on killing us all, Right, Left and Center.  They don't care what our politics is, or they would have returned Gilad Shalit.  Yes, the Leftists aren't immune.  Wake up!
Posted by Batya at May 29, 2011

The one on the right looks pregnant....but you're right about the fashion choice

Yes, she does seem to be pregnant, but I don't see how that photo does the article any good.

I just don't see how the picture demonstrates niceness.

It doesn't show any of the signs typically associated with niceness such as smiling.