As I've written before, many times, ad nauseum, Israel's problems are caused much closer to home than the White House.

"A peace based on illusions will crash eventually on the rocks of Middle Eastern reality.”

But his fine print is the pits.  If he would just take his message all the way, to where it should go, I'd be happy and the country would be safe.  All these appease faux peace sic conferences/negotiations and "two state" delusions are the problems, and Bibi doesn't reject them.


"While Israel is prepared to make generous compromises for peace, it cannot go back to the 1967 lines - because these lines are indefensible."  (Israeli MFA) emphasis mine

Any "compromises" with unrepentant terrorists is insanely suicidal.  Look at a map: 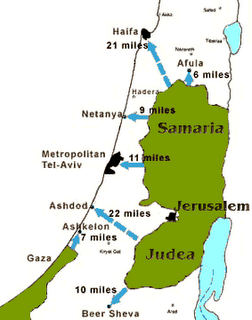 The dangers in giving our Land to the Arabs should be clear to all Israelis and any Jews who bother to take a good look at reality.  The only reason Israel is under pressure is because our leaders politicians don't have the guts and moral strength to tell the world to cut it out, leave us alone etc.  The weakness and blindness to simple reality which dominates the media, politics and the so-called intellectuals here is Israel is the real problem, which causes the situation we're facing.

And now for Glenn Beck to explain the mess Obama is making from an American perspective.  Obama is America's problem.

Good points. Far as I can see, being honest wouldn't upset any more than already are with the quibbling and vacillating.

And, yes, Obama is our problem. But, hopefully, not for much longer.

Good luck in the next elections. The Republicans don't seem to have a strong candidate.

Obama's speech is very suspicious for the Muslims.

Herman Cain seems to be worth considering as a Republican presidential candidate. He seems to understand what the Palestinians are all about.

eagle, I have one priority, Israel

1389, It's less than 18 months before the next US elections. Who is this Herman Cain?

Anyway, by now it's easy to find what an elementary ignoramus Cain in when it comes to politics and history.

Not much better/worse than Trump.

If Cain had real potential, wouldn't his name be more well-known at this point? I guess the Republicans are desperately searching for someone with a chance to win.

Bushies hate Palin and did even when she was their VP candidate, shooting themselves in the process.