Who "Poisoned" The Fuel?

All planes that have filled up in Israel are grounded!  Fuel is contaminated!

How could this have happened? 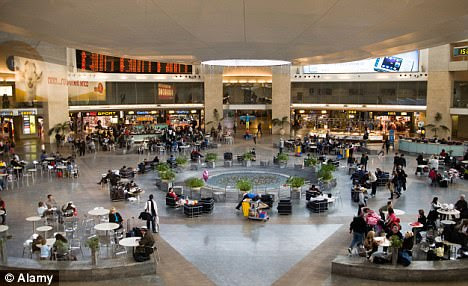 On the TV news, they showed the board flipping to "delayed" for the flights.  In this modern technological world we take so much for advantage.  At some point  the jet fuel became contaminated and suddenly   advanced international air traffic has to stop. They've only allowed planes that had enough clean fuel to make it to a nearby country for refueling.

We take our modern conveniences and speed for granted.  It reminds me of what happened here about a week ago.  All of a sudden the internet on the computer didn't work.  I was about to turn off the computer and go to work in a few minutes, so I just did it and got on with my day.  In the ride I took to work, I overheard the driver tell his wife that he had contacted Bezek (the Israeli landline and internet phone company.)  He reported that they said that there was trouble in the area and it was being repaired.  I then wondered if that was why my internet had stopped.  It ended up taking almost twenty-four hours until the problem was repaired and our phones and internet worked.

Flying may be a safe way to travel according to statistics, but it is getting less and less reliable.  Volcanic ash, snow storms and now toxic fuel are making it harder to be confident that we'll leave and arrive on time.
Posted by Batya at May 05, 2011

The other day, my computer wouldn't boot up. It was stuck at the start-up stage and made a noise like a jet taking off. I turned it on and off, nothing helped.... then I gave it a whack on the side, and it suddenly started to work normally. (it's been fine ever since)

I was so relieved, I can't live without my computer... I was already thinking I'd have to go and buy a new one.
Heaven help us all if we lose the internet ! We know know what to do with ourselves.... I don't even have a phone book anymore. My entire life depends on this computer.

You're so right. I even have my parents' and sister's phone numbers saved as mail with no other way of getting them. As I read your comment I quickly copied them onto paper, part of my new tickets to NJ and AZ.

This is new news to me and I find it quite odd. Wasn't there an interuption of the gaslines last week? While there can be technical issues with the internet and phone systems, the grounded flights are another issue. If we hadn't given back the Sinai we'd have our own fuel supply. We seem vulnerable buying petro from those countries who could turn against us.

JDL, the final word is that this was a production problem, possibly a contamination by bacteria.

While there are lots of standards in place in Israel's petroleum refining industry, this story will lead to more stringent ones - hopefully.

The pipeline hit twice in the Sinai is for gas, not for liquid petroleum. It is mainly used by Israel's Electric Company for electricity generation.

Sinai should not have been given back regardless of there being oil there or not. All Egypt needs to do is to carry out their recent threats to renege on the Sinai Treaty. That's assuming the Israeli government has half a brain.

The gas field discoveries off of Israel's coast are said to potentially make us not only independent but an exporter. The sooner we drill the better. The government can expedite this process if the cut down on the bureaucracy.

If there is indeed so much gas in these fields, Israel might even be able to consider manufacturing liquid petroleum fuels from gas. Then we would be doubly independent.

Oh, and thank you, Hashem!