Is Money the Key to Promoting Aliyah?

We made aliyah as a young couple, very idealistic and probably stupid to boot.  Not stupid because we made aliyah, but stupid because we never learned the system so that we'd have a financially comfortable retirement.  Many "anglos," English speaking immigrants to Israel have the problem.  Other "lantzmen" groups don't.

I don't think we'd be as comfortable financially if we had stayed in the states.  We probably wouldn't have had five kids either.  We'd never have had been able to afford the tuition in the Jewish schools, nor health care.  I don't know if we would have had been home owners either.  Here in Israel we've always owned our own home.  We never paid rent.

Israel is the only place we've been as adults, not counting two years on shlichut in London 35 years ago.  I developed all of my cooking and baking skills in Israel.

I'm always fascinated by all the programs to attract "western immigrants" to Israel, like Nefesh b'Nefesh.  It all sounds so cold and rational, so businesslike. 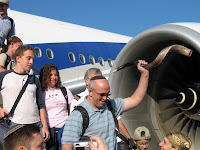 There's a magic about living in Israel, things that can't be computed.

I've never regretted a day that we made our home in Israel just weeks after our wedding.  We came by boat, not by plane.  No matter how you come, there are things you get by living in Israel that aren't in "this world."

There are a lot of money matters involved with moving to and living in Israel. It is not fair to dismiss them.

The total tax bite out of ones salary in Israel goes to feed a bloated monster of a bureaucracy. It is not conducive to work or investment.

Yes, it's great to live a simpler life and no, one doesn't need to strive for US standards of luxury and comfort. Nevertheless, a lot of people have come with with all intentions to succeed and wound up with nothing but overdraft through no lack of effort and motivation of their own.

If half the government were chopped off, we could adjust with a lot more money in our pockets, a lot less taxes to pay and a lot of incentive for more people to move their businesses here without having to lure them with gimmicks.

Shalom!
I disagree with the "lack of effort and motivation" claim. I know people who left Israel because they said they couldn't afford it. What they wouldn't admit is that:
They insisted on living only in high-rent areas.
They refused to change their buying habits, including buying many imported food products.
They refused to cut back on their entertainment/restaurant expenses.
They couldn't increase their job skills because they wouldn't learn Hebrew well enough.

It's true that the high taxes in Israel are a huge burden, but that's only part of the story.
I've seen it over and over again: people determined to stay, stay. And the others kvetch about how hard it is to make a living and leave.

im with shy. making aliyah without a plan is irresponisble. hadassah, you are essentially asking people to downsize. well, you have to go in expecting that.
and batya, if you want to sell aliyah [hey, i bought...] you would do well to be able to articulate why. as an accountants daughter i would think this would be a no-brainer for you.

It seems like many of you consider living abroad the "norm" and Israel an abnormality. You also forget that many people, even in the USA struggle so financially they barely survive month to month.

Friends who made aliyah with a few young kids and had many more here said:
"It was obvious that life would be a financial struggle, so we decided that we'd rather struggle in Israel."

There's the religious element in making the decision to lie in the Land of Israel. It's a mitzvah. Don't forget that.

Don't move to areas full of other immigrants. Transplanted Teanek isn't the culture and doesn't follow "lech lecha me'artzecha, me beit avicha..." "leave, get going from your land, your father's house..."

where i am, what i am accustomed to, is the norm. change is an abnormality.

Hadassa, I was referring to people I know who tried and failed. I was not excluding other possibilities.

I have seen people give their blood, sweat and tears in their determination to stay and they left broken-hearted.

Shalom!
Shy Guy, do they keep Shabbat? How is it that breaking Shabbat in order to make a living isn't acceptable, but leaving Israel is?

I think that the real reason we stayed is because we never considered any other option.

because, hadassa, the mitzva of living in israel does not come close in importance to keeping shabbos.
this is true halachically and socially.

Since when do we rate mitzvot according to [our notions of] relative importance?

a, once you rate mitzvot "socially" you've lost me.
and of course living in Israel-The HolyLand, like Shabbat, is ranked high. There are many mitzvot that only can be done if you're in the HolyLand.
Maoz, amen

Hadassa, refresh yourself on the RAMBAM regarding the 3 main reasons why one is allowed to leave Israel even permanently if need be. Even more so if those same 3 reasons prevent someone living in Chul from making aliyah.

Your comparison of Shabbat and Yishuv Eretz Yisrael is apples and oranges.

I agree with Shy Guy...I am working on my aliyah and finances are a huge part of the equation.

I recongize, and have been told enough, that I should expect to have to lower my expectation emigrating and I accept that, but I want to at least minimize the impact.

But, I am not used to having a simpler life, I don't even know what that is, to be honest.

But it wont stop me from making the aliyah, it might just mean I delay it a couple of years. The important part is that at least I will be back in Israel.

Shy, Robert, of course one should make aliyah with one's eyes open and realistic expectations and live within one's income. That should be done wherever one moves to.
Living here has a different element, too.
Also, unlike choosing between, LA, NY or London, here it should be a matter of this is what I'll have, I'll have to fit myself to it.

Of course living in Israel is a different element. That is why I want to be there!

I was there in Sept 2008. It reminded me of Home...and also Southern California (which was also home). The oddest feelings I ever had in my life.

There simply is no comparison between Israel or going back to California, or London or Rome or any other place in the world. Hence the reason why I will be doing the aliyah.

Robert, good luck; let us know when you're here.