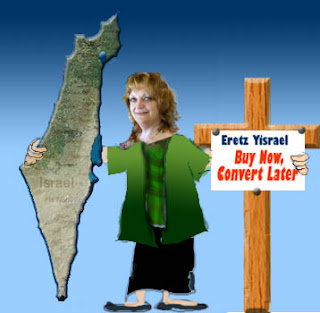 In our previous report Jewish Israel disclosed that Baruch Abrahamovich (Avramovich), the leader of a group of 1000 evangelicals attempting to make aliyah, purportedly convert to Judaism, and purchase land for a settlement in Samaria, is an active and committed messianic Christian.

Coming up next:
Beyond the Israeli political assistance, it seems this group of 1000 Russian-American Christians are receiving guidance and support from “spiritual” sources in Israel.

Jewish Israel contacted and interviewed rabbis who are involved with members of the Hebraic Roots movements and who are in contact with Baruch Abrahamovich.

In our next installment of this report, we will take you on a spiritual journey beyond the absurd.
Posted by Ellen at May 23, 2011

This is exactly what I figured about the money evangelicals were lavishing on Israeli politicians.

I wonder if these people with convert to Reform Judaism or Orthodox. Trust me, Orthodox conversion is not piece of cake and can take a long time depending on the rabbi. Would an envangelical spend that much time and effort? I would think rabbis could weed these people out from the initial visit with the rabbi.

Unless it's Orthodox they'd have a hard time making aliyah.

I definitely plan on reading the entire article. Is there anything we can do in the US to put pressure on the Israeli gov't to stop this aliyah?


Great investigation work by JI. Keep up the good work.

Just one law needs to be passed, just one. Any Xtian or for that matter anyone of any religion which is not Jewish or Noachide that is caught distributing literature in the public square of majority Jewish cities will have his/her table overturned and their literature tossed in the garbage. Any second time offender will have his/her Visa revoked and will be forced to leave the country. There, problem solved. I wish we could do the same to the foreign press which often instigates Arabs to riot for the cameras.

thanks for the comments and encouragement, Keli.

JI will be reporting on some rabbis who have been encouraging the messianic Hebraic Roots movement in our next installment of this report. Unfortunately the parties who are involved that we spoke with are Orthodox, but they are somewhat fringe.

The Reform movement is not exactly evangelical-friendly. Despite their confusion and break with Jewish tradition, many of the American Reform leaders are more suspect of "messianics" than the Israeli Orthodox - who tend to be somewhat naive regarding evangelical movements and intentions (don't take this as an endorsement of the Reform movement. I was raised Reform, but am now happily Orthodox).

As far as what can be done to stop this endeavor, I think those in the US should forward the JI reports to any contacts they have with Nefesh B'Nefesh and the Jewish Agency. In addition, competent counter-missionaries and rabbis in-the-know should be employed by aliyah offices.

Dov Bar-Leib,
the problem is not so simple. Some in these Hebraic roots sects have forsworn proselytizing, while retaining a belief in jesus. Their new replacement theology works like this:
1) They fight anti-Semitism, support Israel and renounce proselytizing
2) They retain a belief in jesus,
consider themselves part of the lost tribes and lay claim to Israel as their inheritance - which they share with "their brother Judah" (the Jews) - resulting in eventual assimilation under the banner of jesus.

We're left with the classic choice of Esau's kiss or Esau's bite.

They're interested in invading Israel and establishing a massive beachhead, as if the messyanics who have been allowed to settle here weren't disastrous enough.

1. A halacha-based Law of Return, which includes denying entry to Jews by birth who practice any Avodah Zarah.

2. An anti-missionary law which forbids any non-Jewish proselytizing to Jews, under the penalty of deportation.

3. Denial and/or revocation of citizenship to all gentiles who are not true Noahides.

Nothing less will do.

Shalom!
Actually, Keli, Reform converts have it easier with aliya than the Orthodox do. Reform and Conservative "converts" are accepted by the Ministry of the Interior, although not the Chief Rabbinate of Israel. Orthodox converts are not accepted by either the Chief Rabbinate or the Ministry of the Interior unless they have converted with one of a list of particular rabbinic courts. You haven't misread. It is a strange situation.
(My word verification is "peres". Interesting, no?)

This idea of a christian village smelled rotten from the outset!

Ellen, thanks so much for your great research and for posting here.
Most Israelis are:
1- too naive
2- grateful for money the xtians and j4j's give