Listening to some world leaders, like the la la Americans Secretary of State Hillary Clinton and U. S. President Barack Hussein Obama, cheering on the Arab "protest" movement, I'm reminded of some classes I taught who insisted that James Bond was a real person.  Fantasy and reality are all mixed up in their minds.

"Spreading unrest..." I love the euphemistic terms used. Does it mean contagious insomnia? I keep thinking of the instability of a house of cards.

The truth is that the protests are violent and the demonstrators are rioting. 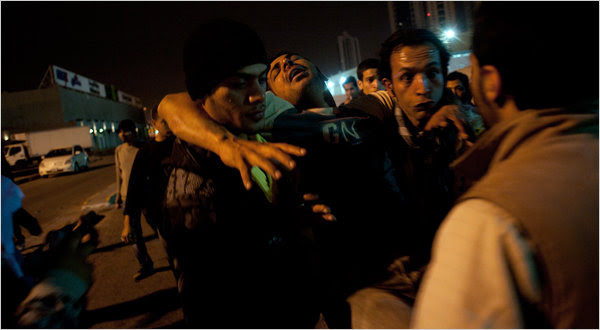 Apparently, Obama isn't surprised by the spreading riots, but his support is totally misplaced.  The various anti-government forces in the Arab world aren't the intellectual, academic refuseniks like those who protested in the USSR.

Please don't get me wrong.  I don't support totalitarian dictatorships, but the rioters in the street will not form a western style democracy.  They'll just put new dictators in to share out the goodies and abuse the population.  It doesn't matter how much money and how many modernizing and democracy programs western countries will pay for.  You can't change the leopard's spots.
Posted by Batya at February 17, 2011

I was very encouraged to find this site. I wanted to thank you for this special read. I definitely savored every little bit of it and I have you bookmarked to check out new stuff you post.

I find it ironic that Obama was utterly silent on the horrendous yet justified riots in Iran (ie. the Where's My Vote? riots) yet in Egypt...

Glad I'm not the only person who hates euphamisms. I swear if I hear insurgents one more time, I'm gonna scream.


OT but during the early days of the war in Iraq I got into a disagreement with my boss over an article for using the words allies to describe other countries we were allied with.

Nope. Allies was the wrong word, the boss said. The mainstream media was using coalition forces instead so I had to use that.

I would certainly hope the coalition forces were also our allies. Hard to tell now. Small distinction but I really felt or at least hoped that these other countries were our allies, not just a coalition fighting along side of the US only for how the other countries involvement could benefit them and then screw the US at the end of the day.

OT again but things are always murky when we declare war not against a country but a regime. I'm still not sure what the US is fighting for in Iraq. We seemed doomed to failure the moment we switched the name of the war from Infinite Justice to Operation Iraqi Freedom.

Infinite Justice offended the Muslims since, they said, only Allah can provide infinite justice. LOL. We're fighting a Muslim country but let's worry about their tender feelings. G-d forbid we should offend our enemy and worry about their hurt little feelings.


TY for allowing the long and at times OT comment.

Richard O'Neill said
I was opposed to the movement to overthrow the Shah in Iran, but I am willing to extend the benefit of doubt to the protesters in Egypt.

Keli, wouldn't you say that "declaring war against a regime" is interfering in the internal affairs of a foreign nation?

a, is it your business?