ON ASSIGNMENT IN JERUSALEM - INTERVIEW WITH SARA SHOMRON 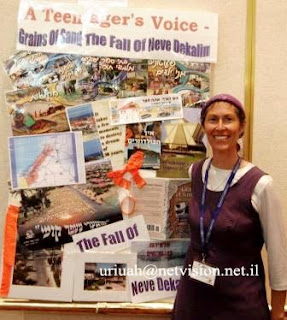 INTERVIEW WITH SARA SHOMRON (Pictured)
Publicist for the book GRAINS OF SAND, The Fall of Neve Dekalim, written by her daughter, Shifra Shomron
(For a copy of the book, go to the author’s website for a list of bookstores: Or contact Mazo Publishers; also a Literature Study Guide is available for the book for free downloading. For more information, contact the publicist at publicist.sls@gmail.com)

I caught up with my friend, Sara Shomron, at the Teachers Conference in Jerusalem, doing what she does best – promoting her daughter’s book. If a kid ever wanted a publicist for their book, they couldn’t find a more loyal, dedicated person than a mother like Sara. The following is about a young Jewish boy who received an awakening to his identity & to his Land after accepting the challenge of a school project and a personal encounter with the author of GRAINS OF SAND. I believe this book should be in every family library and every synagogue for the future education of Jewish children and their identity to the real world of Israel & the young people who are in the struggle to keep it a homeland for the Jews. The interview is in Sara Shomron’s own words:

A 7th grade boy in New Jersey was given a history assignment along with his classmates in conjunction with the State History Day Competition. Conflict & Compromise in History was the year’s theme for students 7th grade and up from New Jersey public schools and this Jewish boy in a public school did not know what he was going to do his project on – he had no idea – so he and his mother sat down at the computer and Google-searched for a subject of interest. Mother & son somehow fell into an interview Shifra had given about her book, and he was wild. He couldn’t believe someone close to his age had written a book about the expulsion of Gush Katif.

He had never heard of Gush Katif before. Even his connection to Israel was minimal so he decided it would be a terrific project to do for his class assignment. He got a hold of the book and as part of his research he contacted my daughter Shifra and asked her questions via email, and they corresponded.

For his history assignment he submitted his project and earned the grade of 100. His teacher encouraged him to participate in the state-wide competition of New Jersey in 2008. This 7th grade boy who had not previously heard of Gush Katif now entered his project called: In the Shadow of a World Destroyed, Memories of an Expelled Teenager, based on Shifra Shomron’s novel Grains of Sand, the Fall of Neve Dekalim and on April 30, 2008 this boy heard over the loud speaker, Gush Katif is a winner! He won first place for his entry in this New Jersey state-wide competition for the Southern Regional Division of National History Day Competition at Rider University.

Afterwards, the Northern & Southern State Regional winners were combined to determine who would be the finalist of the state competition. This boy was not a finalist, but several months later, he marked his Bar Mitzvah. At his Bar Mitzvah each and every table at the reception had a name of a destroyed Gush Katif community, because he wanted all the people present to know of and to remember Gush Katif. It wouldn’t have been the same if Gush Katif hadn’t been part of it. He made Gush Katif known and did his best to increase awareness and keep the memory alive of Gush Katif – a young boy who had never heard of it prior to falling into Shifra’s interview and reading her book, the power of the word, the power of the book and the power of the internet.
He has developed an amazing love for Gush Katif, and in particular a love for Israel.

(Name of the boy withheld by request, due to the age of the minor.

For a transcript of his words about the book, go to Gush Katif is a Winner!

Or, he can be heard speaking on UTube: Readers Discuss the Book Grains Of Sand: The Fall Of Neve Dekalim -- Part 2

also view:
Readers Discuss the Book Grains Of Sand: The Fall Of Neve Dekalim -- Part 1
Posted by Sara Layah at 9:55:00 AM

Wonderful!
Last night at the AFSI event commemorating 5 years since destruction, they showed a few movies about residents, and Sarah's younger daughter Nechama was featured.

I love to read a story like this where the hand of Hashem has so beautifully put people together for His purposes. Virginia

I love to read a story like this where the hand of Hashem has so beautifully put people together for His purposes. Virginia

My fast was meaningful thanks to Shifra's book. I read it over the two days, 8th and 9th of Av. Sadly fitting. I can't say enough good things about it. Although I thought I was familiar with the topic, I learned a great deal, and certainly got the real flavor. I will recommend it, of course. D