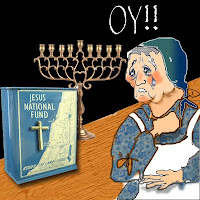 What would Bubbe say if her little blue JNF box suddenly bore a cross?

These days the Jewish National Fund (KKL-JNF) is not only fighting fierce forest fires, but they also appear to be fanning the "fire and brimstone" by forming a partnership with evangelical end-timers from BibleLandTrees.org.

The videos and written content on the site place an emphasis on new testament scripture, end-times prophecy, and refer to jesus as king, savior and messiah.

As an example, one featured video clip says, "And we plant trees so the land will blossom for his [jesus’] coming" (Bubbe would plotz over that one)...more
Posted by Ellen at July 06, 2010

I'd bet my life that Bible Land Trees is a messianic organization based in Israel.

The tip off is simple--prefacing Galilee with "the."

I've never heard any xtians refer to it as the Galilee--only Israelis.

Most xtians call it Galilee.

But whether xtian/messianic it's most likely based in Israel.

Only reading Israeli web sites did it dawn on me that Israelis call it the Galilee.

Hinn was born in Yaffa and has a "healing center" in Jerusalem.

Go to this web site and scroll down to the article about Israeli trees and the JNF.

Great piece of research, Keli Ata!
You have good instincts and experience. But is Hinn affiliated with Bible Land Trees or with another project marketing to Christians via a JNF connection called Trees for the Holy Land (which was featured in the Jpost a couple of years ago)? Or is Hinn's thing a separate endeavor with JNF? Bible Land Trees claims an exclusive rights agreement.

I can't say for sure, but I will dig deeper.

These televangelists and missionaries are sneaks and master liars, so it takes a bit of investigation to get to the truth of the matter.

Hinn is a con man and the subject of a federal investigation in the US.


I also know that he's been pushing trees in Israel for quite a while, most recently the plant an olive tree in Israel and in return get two bottles of olive oil from Israel.

All for $200. LOL, I'm sure I can order it online from a reputal company for way less than that lol.

Thanks,Keli.
We wrote to and phoned JNF, but they haven't gotten back to us.
Will keep you posted.