Are They After the Israelis?

On one of my walks in Manhattan, during my recent visit to the USA, my eyes caught sight of Hebrew writing on some T-shirts. 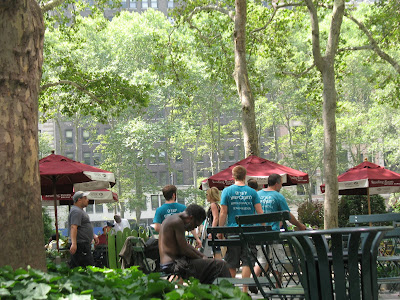 Even after forty years here in Israel, I'm not the swiftest in the Hebrew-reading department, so it took me more than a second or two to realize that these young men are promoting "Jews for Jesus," a Messianic Christian sect. 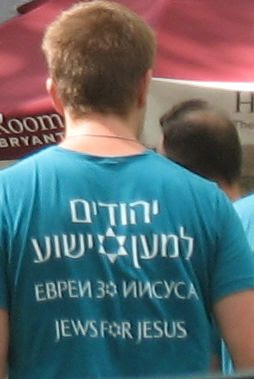 And only when I cropped the picture and saw the enlarged shirt/writing, did I notice that there's also Russian written on it, so they are also targeting Russian Jews.

There are lots of Israelis, students, tourists, יורדיםת yordim, Israelis who live permanently abroad etc are in the area of Bryant Park everyday.  I didn't speak to these guys, so I don't know if they're Israeli or American, but it was clear that they're Christian missionaries targeting Jews.

The majority of people involved in J4J are non-Jewish Christians.

While they keep pushing the JC is the Jewish messiah, I'd just push back and tell them G-d is one, not a compound one. G-d is not a man nor son of man.

In fact, I've read that most missionary groups teach their followers to avoid any talk of the trinity.

these probably ARE russian jews. as for keli ata's assertions that" The majority of people involved in J4J are non-Jewish Christians.", source please? i've been under the impression that the leadership includes non-jews but the targets, as per their name, are all jewish.

also, "J4J and other missionary groups target Russian Jews in particular.."- source please? this is probably true in areas of new york heavily populated by russian immigrants but j4j is, unfortunately and as you should know, a worldwide organization.

"In fact, I've read that most missionary groups teach their followers to avoid any talk of the trinity."

probably the main theological point of dispute between protestants and catholics is the nature, or even existence of, a "trinity". j4j is under protestant auspices, the catholics have nothing to do with it. therefore the "trinity" is not a necessary part of their belief system, and therefore arguing against the "trinity" is useless with these people. there are other ways to refute them, i hope i don't need to give a list. if you're truly in the dark, i suggest reading aryeh kaplan's " the real messiah".

Keli, Yoni, I'll just be simplistic and say that with three languages on the shirts, those are the languages that specific group is prepared for.

Thank you, Batya, for sharing and keeping everyone's awareness level up.

Not to engage in a Christian theological debate on your wonderful blog, but Yoni, you don't know what you are talking about. Both Catholics and Protestants believe in the trinity. There are non-trinitarian christian groups, but they are few in number and very rare because without the divinity of JC, vicarious atonement doesn't have a leg to stand on. Want more information? Go to www.shomreiemet.org

penina, i hope i don't know as much as you do about this subject- after all it seems to be your work. (nice website). but it's not a matter of me "not knowing what i'm talking about." what little i know about protestants, catholics and the reformation is from the protestants i grew up with and the catholics i went to college with. anti- and non-trinitarian protestants are not as uncommon as you say

and neither j4j nor the "messianic" groups teach or require a belief in the "trinity"-certainly not as it is tought in orthodox catholic doctrines, and not as a fundamental part of their beliefs. arguing against the trinity is easy but useless with these groups, as i said. it's just not part of their focus. i'm glad there are people out there doing what you do, and i wish you all success.

Penina, you're the expert. Thanks for contributing.

Yoni--No need for hostility or condescension is needed.

I base what I say on the following:

1. Watch the many messianic TV shows in the US from Jewish Voice to International Fellowship of Christians and Jews. Both target Russian Jews. Exclusively? No. Heavily? Absolutely.

2. I am well-aware of the myriad reasons why JC is not the messiah.

3.J4J leadership is indeed xtian but so are many of its members. I know because in the early 1980s I was tricked (for about a day) into attending a messianic church. I know that the people that tricked me into going were not Jews.

The services were held in a pentecostal church--New Covenant Tabernacle.

4. True, there are xtian groups that reject the trinity but they are small- J Witness, Unitarian Universalists, Seventh Day Adventists.

J4J and their tacts are largely evangelical in nature and thus, while they don't openly push the trinity it is their belief. I heard with my own ears the leader of such a group to emphasis only the messiah (YES, I know he was a false messiah and the reasons why).

I don't need to cite sources as this is all common knowledge. I am a former Catholic, have been duped by these J4J type people, and now regularly monitor xtian television to help warn people.

Batya is right. The Hebrew/Russian on the J4J T-shirts make it clear who they are targeting in NYC.

Please don't slam me to the ground because you disagree with what I wrote.

The majority of these groups rope Jews in with the idea they are "accepting the Jewish messiah" nonsense.

It is important. Check with the rabbi at Jews for Judaism.

Keli, I really appreciate your information. Thanks!

Some topics I'm not qualified to comment on, but I can speak with limited authority on this particular one, though it is based on experience.

All Christians (like me), including the J4J's, believe that JC is the Messiah. As noted, there are a few who don't believe the Messiah is G_d, and so are anti-Trinitarians, but every one of them believes he's THE Messiah.

The reason the J4J's make a point of avoiding the Trinity early on in their evangelizing Jews is because of the deep, culturally conditioned, negative reaction most Jews have to the concept. They're not trying to "dupe" anyone; they're simply trying not to introduce potentially shocking theology early on in the “relationship”.

They sincerely believe that JC is the Messiah and sincerely want every other Jew to believe it, too, so they concentrate on what they believe are the ideas that are more likely to be convincing. They do not deny their Trinitarian beliefs; they just don't open the dialogue with them.

As for targeting Russian Jews, it's probably because they've discovered Russian Jews more amenable to their Messianic message. Or simply that they themselves are Russian and feel called to evangelize their fellow Russians.

By the way, your fears (and hatred) really are unwarranted; just tell the big, bad Missionaries you're not interested.

jsk,those Jews like myself, who have no problems telling missionaries to "bug off, we're not interested" don't fear for ourselves. We fear for the Jews who don't have answers but are willing to dialogue.
Jews don't aggressively approach others to convince them that Judaism is the only religion. We respect other people. It's immoral to try to convince people to leave the religion they are born to.

I just wanted to make a quick comment. You said "It's immoral to try to convince people to leave the religion they are born to." I really have to disagree. I am a Jew, but my parents were practicing Christians (I think my mother acquiesced to my father), so I was born a Christian, but am now a ba'al t'shuva. And I am very thankful to be out of that avodah zara. Judaism was a missionary religion for a long, long time, and only ceased missionizing after coming under intense pressure in the 4th Cent. It's about time we return to our calling to be missionaries again. We need to target Christians as aggressively as they target us.

Because you were born halachikly Jewish you were forced into a different religion from birth. Judaism is your true religion and fate. The same for descendants of the "conversos," aka marranos, those Jews forced to convert to Catholicism during the Inquisition.