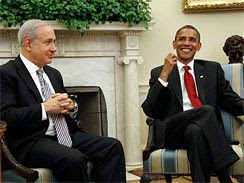 ... as he meets with Netanyahu.
It's no secret that United States President Barack Hussein Obama was told to be nice to Israeli Prime Minister Binyamin Netanyahu this time.  So he turned on the charm and brought kosher food to the White House.
Of course, as Arlene Kushner writes, we don't know what was said behind the closed doors.
Honestly, a smiling Obama makes me more nervous than the nasty pouting one.  I have no doubt that he made lots of dangerous demands on Netanyahu when the cameras were banned.

Obama actually looks insane in that photo.
Throughout the entire interview,
he sat with his legs crossed AWAY from Bibi.
His body language showed his true attitude.

Yes, and in this pic even Bibi looks wary, not like the ones in the Israeli media where he looks drunkly happy.

Obama might appear smiling but he's actually baring his teeth. Probably sunk those teeth into Bibi behind closed doors.

At least Bibi doesn't look like he's got a gun to his head, as he did in other pictures with Obama.

Keli, all I could think of was the big bad wolf.

THe non verbal cues were astounding- Obama is evil and a fraud. Those who have studied non verbal cues for truth telling and sincerity would be able to use the clip as a shocking study on insincerity.

And to think of all the power Obama controls....

Batya,
Didn't anyone on Bibi's staff know that it is the Three Weeks?

No doubt, but they march to the beat of a different drummer

I invite you to view a 3 min. clip on Obama & Israel, as seen from a Hebrew date perspective. You tell me if you think it's coincidence. (http://hezbos.blogspot.com/2010/07/divine-providence-on.html)