It's no great surprise that Turkey is more interested in being pals with Syria and other Arab countries, rather than being a partner of Israel.  Just look at the map.  Israelis seem to forget that we have a very small country, no natural resources etc. 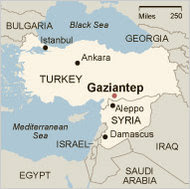 Honestly. I don't think there is anything the Israeli Government can do to repair the damage in Israel-Turkey relations.  Turkey's a Muslim country, and they just don't like us Jews.  Simple as that.  They may like our money, but there's potentially lots more from Arab countries.

Sometimes people have to reach rock bottom to make crucial decisions.  That's what happened when the State of Israel was declared.  The Labor Zionist leaders, like David Ben-Gurion's group were disillusioned believing that Britain and other countries would support a Jewish state, even though facts showed otherwise.  Only after desperate Jewish refugees, survivors of the Nazi Holocaust were refused entry to the HolyLand by the British and it became more and more obvious that the British supported the Arabs, did the Zionists declare the establishment of the State of Israel.

Many Israelis still quest foreign support and approval.  It's dangerous and pathetic.

During this visit to the states, I had some interesting conversations in stores etc with ordinary Americans.  They all professed pro-Israel views, wondering why their government and the media are so anti-Israel.  "Why is everyone always criticizing Israel?"  That was a common refrain.

The State of Israel must face the truth.  Nothing we do will make other governments love us, support us etc.  Our policies must be what's best for us, and then at least we'll get some respect.   It starts with self-respect.
Posted by Batya at July 25, 2010

It is not correct that Israel has no natural resources. It says in this week's Parshah:

Devorim 8:9 (near the end of the first aliya)

It is a land where you will not eat rationed bread, and you will not lack anything - a land whose stones are iron, and from whose mountains you will quarry copper.

There is nothing missing there. What Golda Meir said was wrong - about there not being oil there.

Not just the natural gas off the coast, but over 2.000 years ago oil was found near Jerusalem as indicated in 2 Maccabees.

1:10 When our fathers were being exiled to Persia, devout priests of the time took some of the fire from the altar and hid it secretly in the hollow of a dry cistern, making sure that the place would be unknown to anyone.

[Usually we say the aron. This is really mixed up, and you wonder what really happened here and when]


20
Many years later, when it so pleased God, Nehemiah, commissioned by the king of Persia, sent the descendants of the priests who had hidden the fire to look for it.

21
When they informed us that they could not find any fire, but only muddy water, he ordered them to scoop some out and bring it. After the material for the sacrifices had been prepared, Nehemiah ordered the priests to sprinkle with the water the wood and what lay on it.

22
When this was done and in time the sun, which had been clouded over, began to shine, a great fire blazed up, so that everyone marveled.

23
While the sacrifice was being burned, the priests recited a prayer, and all present joined in with them, Jonathan leading and the rest responding with Nehemiah.

24
The prayer was as follows: "Lord, Lord God, creator of all things, awesome and strong, just and merciful, the only king and benefactor,
25
who alone are gracious, just, almighty, and eternal, Israel's savior from all evil, who chose our forefathers and sanctified them:
26
accept this sacrifice on behalf of all your people Israel and guard and sanctify your heritage.
27
Gather together our scattered people, free those who are the slaves of the Gentiles, look kindly on those who are despised and detested, and let the Gentiles know that you are our God.
28
Punish those who tyrannize over us and arrogantly mistreat us.
29
Plant your people in your holy place, as Moses promised."
30
Then the priests began to sing hymns.
31
After the sacrifice was burned, Nehemiah ordered the rest of the liquid to be poured upon large stones.
32
As soon as this was done, a flame blazed up, but its light was lost in the brilliance cast from a light on the altar.
33
When the event became known and the king of the Persians was told that, in the very place where the exiled priests had hidden the fire, a liquid was found with which Nehemiah and his people had burned the sacrifices,

[that is, they found oil, as see later]

34
the king, after verifying the fact, fenced the place off and declared it sacred.

[There may have been such a fence]


35
To those on whom the king wished to bestow favors he distributed the large revenues he received there.
36
11 Nehemiah and his companions called the liquid nephthar, meaning purification, but most people named it naphtha.

[Now here he really shows his ignorance. Nephtar does not mean purification. What he is mixing this up with is that when people visited they were made tahor, including using the Parah Adumah, and when this was completely they were it was said they were niphtar - Putar - it means free of liability, not pure.

It is this person's ignorance that shows he has to be right.

Naphtha is basically crude oil, although it has a somewhat more limited definition now.

"In petroleum engineering, full range naphtha is defined as the fraction of hydrocarbons in petroleum boiling between 30°C and 200°C[1] It consists of a complex mixture of hydrocarbon molecules generally having between 5 and 12 carbon atoms. It typically constitutes 15–30% of crude oil, by weight."

"he word naphtha came from Latin and Greek. It is an Ancient Greek word that was used to refer to any sort of petroleum or pitch. It appears in Arabic as "nafţ" (نَفْط) ("petroleum"), and in Hebrew as "neft" (נֵפְט). Arabs and Persians have used and distilled petroleum for tar and fuel from ancient times, as attested in local Greek and Roman histories of the region."

Of course it is not generally known there is oil and natural gas near Israel - and to the extent it is, others would like to grab it or claim it:

Hizbullah: Israel's gas belongs to us

Hizbullah claims that that the natural gas fields recently discovered in the Mediterranean, belong to Lebanon and warned Israel against extracting gas from them.

Earlier this week, Lebanese parliamentary speaker Nabih Berri told "AFP", “Israel is racing to make the case a fait accompli and was quick to present itself as an oil emirate, ignoring the fact that, according to the maps, the deposit extends into Lebanese waters. Lebanon must take immediate action to defend its financial, political, economic and sovereign rights."

The issue of natural resources is irrelevant,

It is not that Turkey is a Muslim country - it is that Erdogan has dictatorship envy. There may still be enough freedom etc in Turkey for him to lose the next election. Till then relations between Turkey and Israel may not be very good.

I don't think natural resources was what Batya was trying to emphasis but rather that Muslims will never make nice and be friends with Israel.

Whether a person or a country, when they've got you in their crosshairs it's doubtful they're going to change their minds. so you can either fight back or stare back at them with doe eyes, hoping the hunter will suddenly decide he doesn't want to hunt you down.

Muslims, at least in the Middle East and speaking in terms of gov't are basically hunters. Could they decide to break bread with Israel? Possible, not probable.

It was that point about Israel having no natural resources that I wanted very much to comment on.

But also it is wrong to say that that is the reason Turkey and other countries are not friendly.

Wnen Israel *does* appear to have natural resources they are no mre friendly - in fact Israel's enemies simply want to lay claim to these resources.

So lack of petroleum or other natural resources is not the reason Israel may not have as many friends and conversely, its presence also can't be the reason thst Saudi Arabi and the Gulf States do. That is far too great an oversimplification.

Oil is not the reason they have some "friends." It is not oil or any other kind of natural resource but bribery and influence peddling.

By the way natural resources do help (at least the people of) the Congo or Zambia or other places in Africa. The people there get killed. Some local people, with arms either the government or others, get rich. And natural resources can't do much good for Afghanistan until *after* the war is over.

Sammy, Keli, Israel is too small for its material riches to attract others. Remember that both Christianity and Islam have attempted "identity theft" and want to be G-d's chosen.