Pre-Disengagement, the opposition took on the color orange as its symbol. I joined the many thousands in wearing an orange bracelet. On the bracelet you can read a slogan:

יהודי לא מגרש יהודי
Yehudi lo migaraish Yehudi
A Jew Doesn't Banish/Evict Another Jew
During the tense and unpleasant times before Disengagement, especially after the Bayit Yehudi, Jewish Home, leaders were arrested and Moetzet YESHA Council took over, I became totally disenchanted with the "orange" leadership. At this point, it doesn't pay to go into detail, but certainly, if they had been competent Israel would still be sovereign and Jews would be living in Gush Katif.
The struggle was waged so poorly, it made me wonder how seriously Moetzet YESHA wanted to win.
Regardless, just like I believe that we must support the IDF, the Israeli Army, despite its faults and we must support the State of Israel and fly its flag despite all the wrong it does, I keep an orange ribbon on my door and kept orange bracelet on my wrist.
Over the years, the orange became dull, dark and dirty, and this week it finally broke and fell off. 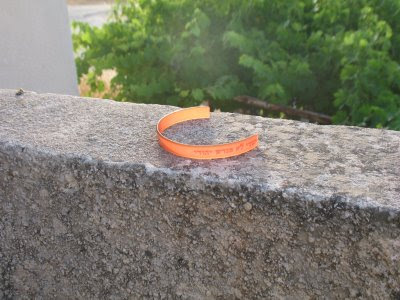 Yes, my wrist no longer proclaims/advertises my opposition to one of the most evil government decrees ever.

The "orange leadership" never provided good leadership. Its monument is the Arab terror base where Jews once lived and thrived in Gush Katif. The DP's, evictees, are trying, despite their poverty and the apathy of the Israeli Government and most of the Jewish People, to rebuild their lives.

There was never a mass movement for Jewish civil rights in Gush Katif, unlike the support for Jews in the Golan. That's why we're still in the Golan instead of it being a Syrian base for anti-Israeli terrorism, the way it was prior to the 1967 Six Days War. 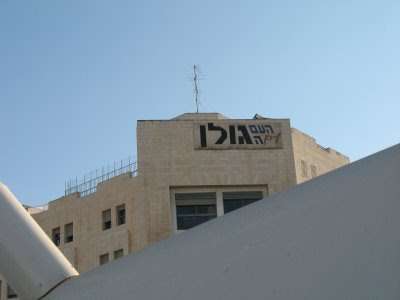 Shalom!
"The struggle was waged so poorly, it made me wonder how seriously Moetzet YESHA wanted to win."

The contrast with the Golan is very important. The leadership of the Golan advised the YESHA camp prior to the expulsion. Was the advice not taken? Was it not appropriate for YESHA?

Hadassa, I agree with you completely. I remember Menachem Begin saying that he was giving away the Sinai to preserve YESHA and that the new communities including in Gush Katif were compensation.