Christocracy and Our Cardinal sins 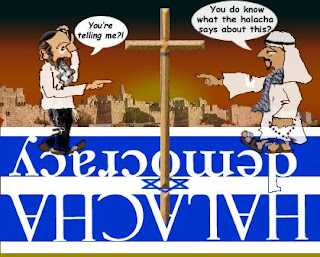 Christocracy in the Holy Land:

Organizations like The Christian Embassy (ICEJ) regularly praise Israel for religious freedom while criticizing countries where “Christians cannot practice their faith openly, build churches or propagate their message!” There’s a clear implication that in order to qualify as a democracy, a country is required to allow the Christian message to be spread without restraint. Where does that leave the Jewish state, and those charged with upholding Torah values? Jewish Israel takes a look at the ICEJ agenda and the Jewish position on Tolerance, Religious Freedom and Proselytizing?...more
-------

Warning: Before proceeding to this post, know that you are most likely in violation of at least one of the sins listed. So, if you can’t take the heat, stop now, because you are about to enter the Shmad Zone - where Jewish Israel asks, “how low can we go” in the quest for tourist dollars?...more
-------

Calev Myers: He loves me... he loves me not

In November of 2008, Calev Myers the Chief messianic Counsel for The Jerusalem Institute of Justice praised this writer for, “…simply good penmanship… You base your articles on facts and state your opinions clearly while using an apparently healthy sense of humor…your writings are like a breath of fresh air.”

Well, it seems I’ve fallen from grace, as last week Myer’s JIJ e-newsletter referred to me as a “radical activist” and “spokesperson for the radical Orthodox agenda in Israel”

Jewish Israel wants to know, what is a "radical Orthodox Jew"? Is it an evangelical fiction, fetish, or a little bit of both? Perhaps it's the creation of an evangelizing/messianic world - used to discredit those who uphold, protect, and defend Torah Judaism.
...more
Posted by Ellen at June 18, 2009

Well Ellen, I'm half tempted to tell you to send an email to Calev Myers thanking him for recognizing your dedication to upholding Torah obsverance and truth in Israel:)

Half tempted that is because Myers is watching his words but what I think he's really saying (and I hate hate hate writing this) is: Obnoxious and pushy Orthodox Jews. That's how his statement comes across.

That's what he and evangelicals like him are most likely implying when they call Orthodox Jews "radical activists" and pushing an Orthodox agenda.

I see a lot of this attitude on You Tube--videos in which an evangelical waltzes into a frum Israeli neighborhood and provokes a Jew to the point where rudeness is the only way to get the person to back off.

Then it gets posted on You Tube as an example of rude and pushy Orthodox Jews. It's deplorable. As bad as the many bum bashing videos in which the homeless are taunted, ridiculed and recorded.

Interesting too about evagelicals demanding religious freedom in Israel.

I thought they already have religious freedom. Aren't there plenty of churches of all denominations? Nobody is preventing an Israeli from converting to another religion (tragic as it is).

If the reverse were true--say an Israeli TV station were to air anti-missionary and pro-Noachide shows on broadcast TV in the US the evangelicals would go absolutely ballistic and petition the FCC.

Take this little example from my own experience with an uptight evangelical woman who stopped in the newspaper where I work:

Well, it's a private business and they can say what they like and set their own store policies.

Devil's Adovate me told her with a smile that I had no problem with saying "Happy Chanukah" to Jews, "Happy Halloween" to Wiccans and secular people, "Ramadan whatever" to a Muslim (Okay, I wouldn't actually say that) and so forth.

She left in a huff telling me: "People are just afraid of the name of Jesus Christ."

I'm not afraid of it at all I said with a good natured smile:)

Touche! I made my point with her.

Made my point again a few days later with another church lady who tried to get me to go to a Halloween party at HER church lol.

Her: Would you like to go to a Halloween Party at my church?

Her: Would you like to go to church? I can get you a ride ther.

Her: Do you ever go to church?

Her: Well I'd like to know why you don't go to church?! (at this point she's angry).

I could have backed down for fear of her calling me a christ killer or something. Lot's of pushy evangelicals confront Jews with that to intimidate.

So I told her exactly why I don't go to church--there are idols in there and they worship a dead man as god. Simple and to the point--and my tone of voice was friendly:)

They're just saying you can't trick, harass, or bribe someone in the process.

Keli Ata,
No need to apologize for your thorough and worthwhile feedback!

I appreciate someone with your experience telling it like it is.

You may be on target with regards to how Christian fundamentalists perceive Jews who defend their faith when challenged by missionaries.

The gospel is not for the Jew, and any Jew with their head and heart in the right place will be offended and utterly reject provocative missionary overtures. It is, and should remain a core issue for any Jew. And counter-missionary legislation should be high on the Israeli agenda.

I think Calev Myers is upset by my challenging him on his handling of the Ortiz case - and
a)exposing the serious ethical lines which were crossed by his taking advantage of a police gag order, and unresolved case, in order to weave unrelated events and to perpetuate a myth about a "radical Orthodox agenda"

b)exposing certain evangelical undercurrents via the Christian media's reaction to the incident which border on the anti-Semitic and reveal an overt evangelizing agenda - and bring into question the entire Israel-evangelical enterprise.

c)exposing the reality -based on his reaction and the reaction of the Christian media, that perhaps the evangelical world is far more reactive - in a very negative way - than the Orthodox Jews that Myer's so zealously accuses.

Calev Myers has become a spokesman of sorts for Christian/Messianic Jewish persecution in Israel among evangelicals in the US. I've seen him on several messianic programs like Zola Leavitt Ministries and others in the US not to mention CBN.

I think he and the Christian Right showed their true anti-Semitic colors in the Ortiz case.

Not only did they horribly exploit the tragic bombing of a child they placed the blame squarely on Orthodox Jews without justification.

From what I understand the boy's father was a Messianic Jew but a vocal missionary who had received death threats from Muslim groups for missionizing to them.

They seemed to me to be the more likely suspects.

I just don't see an Orthodox Jew delivering a bomb filled Purim basket when he's celebrating the holiday with his own children. I just never could accept that.

But if you read the outrageous comments on the CBN message boards that's exactly what evangelicals were saying.

Then locally in the US on the TCT Network we had a Messianic "rabbi" condemn the bomber--whom he identified as an Orthodox Jew--and went on and on about how he spilled his brother's blood and needed to accept "Yeshua."

BTW: the pastor/rabbi's name is Moshe Laurie. He has a TV show called Spiritual Warfare and claims to have worked for Mossad, was a hitman for the Israeli government, and claims he found Jesus in a Catholic Church.

Also claims his family in Israel had him locked up. Sounds like a real piece of work. And once again claims he was an Orthodox Jew but his knowledge Judaism and even pronunciation of basic Hebrew is funny.

Have you ever heard of him before?

What I find most perplexing about the Ortix tragedy is that the evangelical community refused to accept the idea that it was most likely a Muslim attack.

Why would they deny it was anti-Christian persecution by Muslims? The only answer I can come up with is that it 1. exposes their blatant anti-Semitism which seems to trump everything and 2. they'd have to admit that even Muslims (like most everyone else) don't want Christians pushing their religion down their throats.

Messianic is the right thing!

David Letterman's hate is as old as some ancient Hebrew prophets.
Speaking of anti-Semitism, it's Jerry Falwell and other fundy leaders who've gleefully predicted that in the future EVERY nation will be against Israel (an international first?) and that TWO-THIRDS of all Jews will be killed, right?
Wrong! It's the ancient Hebrew prophet Zechariah who predicted all this in the 13th and 14th chapters of his book! The last prophet, Malachi, explains the reason for this future Holocaust that'll outdo even Hitler's by stating that "Judah hath dealt treacherously" and "the Lord will cut off the man that doeth this" and asks "Why do we deal treacherously every man against his brother?"
Haven't evangelicals generally been the best friends of Israel and persons perceived to be Jewish? Then please explain the recent filthy, hate-filled, back-stabbing tirades by David Letterman (and Sandra Bernhard and Kathy Griffin) against a leading evangelical named Sarah Palin, and explain why most Jewish leaders have seemingly condoned Palin's continuing "crucifixion"!
While David, Sandra, and Kathy are tragically turning comedy into tragedy, they are also helping to speed up and fulfill the Final Holocaust a la Zechariah and Malachi, thus helping to make the Bible even more believable!
(For even more stunning information, visit MSN and type in "Separation of Raunch and State" and "Bible Verses Obama Avoids.")

Not necessarily! You also have the leading Christian Zionist himself John Hagee writing that G-d caused the Holocaust and sent Hitler as a hunter.

I tend to be distrustful of so-called Christian Zionists and their over-involvement in Israeli affairs. Growing up I attended a small Catholic Italian-American congregation. Missionizing was never ever preached or discussed or practiced. Ever.

People who cared for Israel simply called themselves pro-Israel. People had friends who were Jewish but didn't go around saying, "Look at how wonderful I am! I love the Jewish people."

BTW for anyone reading here--if you click on "Messianic's" name on his comment it leads to a web site that sells Judaica, including messianic jewelry. It's a messianic site, as his or her name implies.