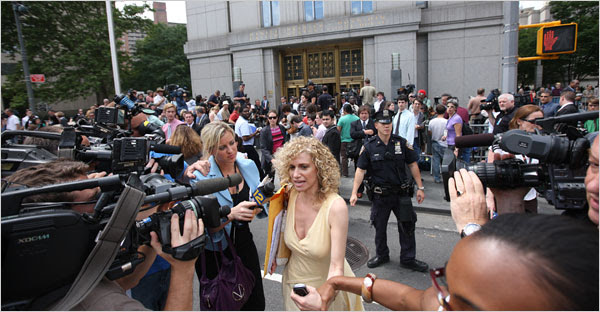 OK, now it's official, Bernie Madoff was declared/judged guilty and he's supposed to serve until death. But I'm still bothered by the fact that he has been able to protect those who worked with him on the scam.

"...was respected for his vision and trusted by tens of thousands of customers,..." complete article

That means that there must have been many, many people in his business who knew that the business was a sham, one big rich card game, ponzi scheme. There's no way only he knew what was going on.

Not true. It's enough that the top row of the pyramid alone was corrupt.

Take investor Ezra Merkin, for example. He's going to wind up paying dearly but not because he was in on the scheme but because he did not perform due dilegence.

Merkin was one row from the top of the pyramid.

So were some of Madoff's closest friends and relatives, also swindled out of everything they had.

How many were in that top row? Who are they. It's obvious that he's protecting them.

Shalom!
Please go to mises.org and read a variety of articles about Madoff. Many people who used independent financial experts to examine Madoff's investment plans did not invest with Madoff and some of them informed the SEC of Madoff's fraudulent dealings. I'll get the links now.

Shalom!
Here are the links. The first link has links to articles and a document verifying that the SEC was informed about Madoff and did nothing. Most of the others provide mostly background information.

150 years for imitating the Social Security Administration. And all this time I thought that imitation was the sincerest form of flatery.

Thanks, Hadassa, I see that the focus in on the legal foul-up.

Kae, SS is something else. The babyboom gave the parents generation good income, and then the babyboom didn't reproduce, so retirement goes up.

Madoff conned; he lied. He claimed to be investing, while he wasn't. Financially it may seem similar, but morally it isn't.

Shy, SS is an enormous organization, and of course a certain percent may fail. On the positive it does help people. But Madoff lied, cheated, stole and conned. And now there's a cover-up.

Batya, scan through articles in this Google search.

It is all a mirage. Your appreciation for Social Secuirty is only because people you know who were eligible got their promised share back.

They are like Madoff's early investors who Madoff paid back with cash from the new suckers he just signed on the dotted line to fund his financial black hole.

Chazal say: "Who is wise? One that sees what is coming."

Have a glance at Israel's Bituach Leumi (National Insurance). This is what's going to be happening in the US in the not-too-distant future. Amounts returned will be reduced substantially and the agency will spend most of its time concocting ways not to dish out money to those who were supposedly entitled to it.