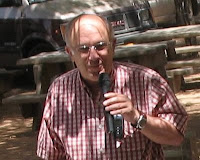 It's hard to figure out what Moetzet YESHA really is. Or more accurately, it's not very pleasant to admit it to myself. But one thing for sure, its policies don't reflect the feeling on the ground.

Pinchas Wallerstein, its present chairman, has finally retired from his role as head of my district, Mateh Binyamin, and seems to be trying to act "political." He has some convoluted proposal which will please nobody. He, who has no authority over the sic "outposts" is willing to transfer those built on "private Arab property" on the condition that the government unfreeze the building in YESHA.

Interestingly or ironically, in his own yishuv the very veteran Ofra, many of the houses, possibly even his own, are built on "private Arab property."

I've said it before and I guess I have to say it again:

If you don't recognize Jewish rights to all of Eretz Yisrael, the Land of Israel, then you're endangering the entire country. We have more historical and moral rights to Shiloh, Hebron, Shechem and Jerusalem than we have to Tel Aviv!

Boker tov, around 10 years too late.

Have you watched the 4-part video "Hameraglim" ("The Spies")?

Honestly, Shy, do you think this is the first time I've said it? We have to keep pounding it in. Broken record...

ShyGuy, thank you very much!!! This goes in the 'need to watch' movies.

Yes, and remember that I complained about Moetzet YESHA long before the disaster.

Shalom!
I"m always amazed that the Yesha Council can still walk in public without hanging their heads. They should have cleaned out their offices when they sent 60,000 people home after duping them into baking in K'far Maimon for three days when they had NO intention of leading them to Gush Katif, which they admitted in at least one public interview after the expulsion.
Or perhaps K'far Maimon was just a glaring example and they should have quit long ago. At least they should have completely stayed out of the struggles to hold on to the communities that they helped build.
As many have reminded all of us, the members of the Yesha Council are GOVERNMENT employees. It's hard to say no to the boss. It's also been said by many that the Yesha Council knows how to build, but not to defend, communities. A wise man knows his limits.

Shalom!
Thanks for the link Shy Guy. It didn't teach me anything that I didn't know, even before the expulsion, but it's nice to see that the video is out there educating anyone who cares to learn. I suppose it's time to search the 'net for more Gush material. A few months ago I saw the Arabs totally flattened K'far Darom - buildings, trees, grass. Everything. Only the dirt (K'far Darom is north-east of the sand line), which happens to be orange, is left.
Now that I've seen the video I'd like to add a few more comments:
Would anyone like to respond to the comment on Part 4 that claims that the video could have be orchestrated? I'm not quite sure how to respond.
We saw the role that Rabbis Aviner, Alon, Druckman, etc. played. What many may not know is that there were at least three rabbis from Yesha, including at least one from Gush Katif, that were not allowed by their peers (loosely defined) to either speak to or advise the crowd at K'far Maimon, for obvious reasons. It didn't come to this, but I'm sure they would have been blocked by force - quickly and quietly.
Mateh Gush Katif did not support the Yesha Council's decisions, including letting the IDF have control of the hotel. The Mateh was squashed by the larger and more influential YC.

About the hotel, Malon Hof Dekalim. The owner of the hotel, who did not live in Gush Katif, was offered a large sum of money to rent it to the IDF. He refused, and, at no charge, let Datia Yitzhaki et al renovate it for the purpose of hosting supporters who came to prevent the expulsion. Volunteers did the renovations and donations funded the supplies.
The YC gave the hotel to the IDF. People were instructed by the YC, specifically the local branch, not to go to the hotel to resist the expulsion because "it wasn't necessary". Anyone who doubted YC's intentions after that was fooling himself.

Hadassa, I stopped supporting YESHA Council when I realized that their "protest" slogan was counter-productive. "Ten l'am l'hachlit," "Let the people decide" was the dumbest and most failure-aimed possible.
There was a group called Bayit Le'umi which had good ideas, but then they were all arrested, shades of the sezon. And we all know what happened.

"The people is a donkey."

(politician whose name I can't remember or find)

That's democracy, my dear. It didn't work in the Bible, Sin of the Spies, and the people haven't gotten any wiser.

The issue is leadership. We are always looking for leadership and we hoped that Yesha Council was providing it. And time and time again, we are deceived. What it comes down to is that if you are thinking like the enemy, then you have already lost. Yesha Council was a consumer of Israeli mass media. They did not want to stop the expulsion, they wanted tio save their/our image.

Since then, tahnk God, many grass roots organizations have sprung up.

Shy Guy, I take it you liked the film? I did, too.

Batya, Get your husband to help us find out the Yesha Council Budget sources. He said it's not from the Office of the Prime Minister like I thought.

The film states that money comes from Amana to the Yesha Council, too.

Thanks Hadassa. WIG have been working on Shdema. It's only the Binyamin area, controled by guess who which has been quiet.

Ya'aqov, I remember reading that Pinchas transfered Binyamin funds to Moetzet YESHA for its "anti-Disenagagement activities." I think I read it in the Jpost, and I surmised from that that the govt was permitting it, even though it isn't legal, as a way of funding Moetzet YESHA.