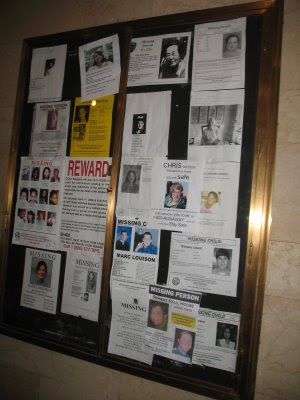 During my recent visit to New York, I noticed this bulletin near the police station at Grand Central Station.
In Israel it's harder for people to "just disappear." Wherever we go, we run into people we know or met. The country is smaller.
But we do have missing Israelis, those captured by our enemies. Israel allows enemy Arab prisoners visits by the Red Cross and even family, but the same rights and courtesies aren't offered by the Arab countries and terrorist groups which have captured Israelis, like Gilad Shalit.
Recently Yona Baumel died, decades after last seeing his son or knowing his whereabouts.
Israel must cease all visits, yes humanitarian visits, of Arab prisoners until our missing soldiers are returned home... alive or dead.
Posted by Batya at June 19, 2009

So true. The Israeli government should indeed halt humanitarian visits to Arab prisoners until the Arabs start permitting visits to Israeli prisoners.

Except it's important to remember that people such as Gilad Shalit aren't really "prisoners" in the sense that they've been tried and convicted of crimes.

In negotiating and releasing Arab terrorists in exchange for Israeli captives the gov't should also remember the cruel hoax Hamas pulled with kidnap victim Eliyahu Asheri, 18.

Hamas went on TV with the poor civilian boy's ID and personal property offering to release him in exchange for prisoners--all the while the teen was lying in a shallow grave, dead from a gunshot wound.

He was kidnapped and killed shortly after Gilad Shalit's capture. I think his killers were caught but nobody ever seems to write about his murder anymore.

But I doubt I will ever forget the cruelty of Hamas in murdering him or pretending he was alive to get terrorists released. Just cruel in every way.

Keli, thanks for writing this. We're so overloaded with stories that it's hard to remember all of the victims.

Batya how right you are!! Why do we Jews have to be so (what is called in Hebrew) "Yafe Nefesh?" Why do we constantly have to behave better than everyone else in the world at our own expense?

As the Torah says, if you have pity for cruel people in the end you will be cruel to those deserving pity!!!! Let our captive terrorists rot in prison! Let them sleep on cement floors and eat dry rations!!! ("manot krav" in Hebrew)

What I believe we must all do is send e-mails to the government and Knesset members and sign all the petitions floating around the web.

On a spiritual level, we should daily have in mind both Yonatan ben Malka and Gilad ben Aviva when we ask Hashem to "free captives" in both Berchot Ha'shachar and Shmoneh Esrei.

Netiviotgirl, we're not being "better." We're acting suicidal, sacrificing our best needs to buy favor with those who prefer us dead.