NRP-Jewish Home Should Close The Business

There was a very large choice of parties to choose from in this year's Israeli Elections, but not all got in. 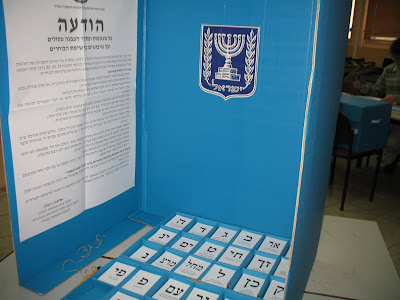 There's lots of talk that the "far Right" Ichud Le'umi (NU) and Jewish Home (NRP) would have done better if they had stayed united as one party. That talk's from the media and those not involved. I think there would have been a lower Right turnout and fewer seats. Most of us, who had voted for the united party last elections, were disgusted, frustrating and wondering what to do with our precious vote.

Before the previous elections had I tried volunteering for the party. A few dozen of us English speaking/writing activists showed up at the NRP building on King George St., Jerusalem. We were armed with enthusiasm for a united political party of Moledet-NRP etc. We found the NRP spouting tired old slogans and knew that we were in the wrong place.

That's why Arieh Eldad's supporters established Hatikvah, but the brilliant professors backing him haven't a clue how to succeed in politics. So, again, I felt shut out. The reconstituted National Union suits my ideology. It was just very last minute and therefore didn't reach its potential. Yes, it has potential. The NRP-Jewish Home doesn't. The vast majority of its voters are old. For many it's the party of Bnai Akiva and high school memories. I come from a different world and don't have those shared memories.

Today's Israeli youth remember how disappointed they were with the NRP during Disengagement and Amona. Even their school system is in crisis. Many parents are looking for alternatives to the state-run Mamlachti-Dati system and Bnai Akiva High Schools.

NRP-Jewish Home should really close its doors. Their name change was just a PR act. The best of today's Israeli youth reminds me of the idealism of my own in the 1960's. We rejected the platitudes of our parents and looked for genuine meaning. The "sixties" wasn't just "drugging out." For those who went in that direction, it was a rejection of the post-WWII staid materialism. For many of us, our reaction was activism and idealism. That's what brought me to Torah Judaism and Zionism.

Today's national religious zionist youth (lower case letters) sees through the superficial images. That's why they live on Biblical hilltops or in non-religious cities to make a difference. The ones who have dropped out, or "took off their kippot," are obviously another story. But they're not NRP voting potential either.

Don't forget that Bibi didn't win big, because he ignored his potential voters by his words and actions. And the NRP is lucky to have made the cut this year. Its ideology is no longer relevant or attractive. Lieberman's Israel is Our Home and Ketzela-Eldad's National Union spoke clearly and got votes.

Now we're waiting for the official final distribution of Knesset seats and the coalition bribery/negotiations.

Hashem Ya'azor
Heaven Help Us
Posted by Batya at February 12, 2009

That doesn't contradict what I said. There are old, tried and true methods of dislodging political paperweights from power.

If you can so easily dismiss the voters who did come out to vote NRP, the almost identical amount of Ichud Leumi supporters can also be just as easily dismissed ....

Shimon, I'm rather immune to the charms of NRP. I always was and I guess I'll always be. I hear a clear message/ideology from NU. It seems we're on different frequencies.

Shy, As I've said before, we ought to agree to disagree on certain topics.

You don't need to be charmed by our message but that is not the same as telling us to close shop.
I think one of the most important issues on the RZ table right now, is whether we will be able to overlook our differences and work effectively together or will the chasm deepen.

Shalom!
Look at WHO voted NRP and WHO voted NU, not just at their relative numbers. It's not difficult. The official voting results for each city and settlement are available online. A quick glance at the results in Yosh, community by community, shows that the statists voted NRP (NRP Bet, as in sug bet), the Zionists (It's always capitalized, isn't it?) voted NU, the "traditional" but not religious voted Likud, the Russians voted Lieberman etc. I haven't gone over the cities yet.
Concerning the NRP-NU split, I was totally disgusted by the NU at the last election when they bailed out the NRP. The results were predictable: fewer votes because the NRP sellouts didn't want to vote for the NU radicals and vice versa. They lost my vote. This time I could vote for NU.
Concerning schools, I've noticed that only in Yosh and Jerusalem are the mamlachti dati schools truly religious.
The dati-leumi community is coming of age now, struggling through adolescence. It's going to be rough until adulthood is reached.
Hashem Ya'azor (We've been saying that a lot lately.)
Hadassa

Shimon, the NRP message isn't attracting voters, certainly not too many young ones. The fake closing of the party didn't win it many fans, certainly not new ones. The party is rich; it owns property and it has institutions under its auspices.
Now continue with the link which Shy posted. It discusses religious Zionists and the need for the religious zionists to unite. When I saw that I stopped reading.
That's why the Moledet-NU had to leave. It's not exclusively religious. When the NRP says that it will allow "one" non-kippah wearing person in the top ..., it's making it very clear that there is no unity, no equality. They are just doing a "favor" to get votes. It's a gimmic, just like the new name.

You can't break up something which was never really one.

Hadassa, true about the schools. I got some interesting info about the BA hs's. For another post.

inevitable or not the split is a fact

i don't see anything productive coming out of the discussions: who's fault is it / who is better / who has more votes

Shimon, I think the voters for the two have more in common than their leaders.

Bs"D
You are right. For the first time I voted and volunteered for the National Union with a full heart. They have my confidence from an ideological point of view, and also because of a 1st class line-up of candidates. My favourite is Rav Michael Ben Ari, though I like and respect the other 3 leading candidates. It's a pity that so many of the religious camp felt an uncontrollable urge to vote Likud. Moshe Feiglin should understand that the only thing causing the Likud to 'turn right' is its potential coalition partners. I tremble to think what would Bibi do with 31 mandates and no National Union (as he would have wanted).
Shavua tov, Yoni

Thanks, Yoni, so many of the NRP "bet" voters consider it like a religion and haven't really thought about what it stands for.

And many who voted Likud never listened to what Bibi has said about it being a center party.