Hat tip to Sammy! I have been so busy with the Israeli Elections, that I hadn't realized that the Obama-Media Honeymoon was already over. 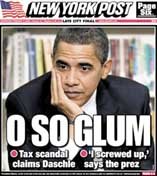 I think that Obama and staff forgot one of the most elementry rules of the game. I you're considerably younger than your peers, you must act older to show your competence. It's related to the "How to succeed axiom for women, Blacks and other minorities." The rule is to work more than doubly hard.

Isn't it peculiar that women, who are more than half the adult population, are categorized with "minorities?"

I guess Obama is discovering that for him, getting elected was the easy part. I've said all along that his color gave him the election. When people tried to explain that they oppose him becuase he's inexperienced, untried and unknown, they were accused of being afraid of a Black as President of the United States.

Black, green, red, yellow or purple... Obama's color has nothing to do with it. The mistakes he's now making are no surprise to those who don't follow the PC religion. Americans, raised on politically correct affirmative action, found it difficult to vote for McCain-Palin and even Hillary Clinton.

Ironically, here in Israel, Bibi Netanyahu's Likud campaign was carefully tweaked to follow what he considered the PC guidelines, and now he's rapidly losing ground to Avigdor Lieberman who is saying what the public wants to hear. And similar in mindset to loser-Hillary, Bibi is trusting out-of-touch and out-of-style Benny Begin to give him a Right wing tint. Hillary's campaign had been conceived a generation ago. She would have won if she had divorced Bill after/during the Monica scandal. "Stand by your man" doesn't suit the 21st Centruy.

Today's Israel doesn't think of Benny's father as particulary Right wing. Menachem Begin is remembered more as the man who gave the Sinai to Egypt, destroyng Jewish communities and setting the precedent for Disengagement.

Israel is looking for leadership and Bibi's not offering it. The media is trying to show Lieberman's boasting as bombastic, but he may very well have the last laugh...

Blogger's spellcheck isn't working, so if you notice typos, please let me know. Thanks and Shabbat Shalom