They sure didn't have weather like this where I was growing up on Long Island, New York.

The sky has been a heavy yellow. Doctors are warning people with lung conditions and other weaknesses to stay indoors, and keeping the windows closed. Visibility is so bad that air travel is dangerous.

Even though the meteorologists are predicting rain, the clouds aren't moist. There's no humidity. My sheets dried very quickly. The rest of the laundry is hanging in the house, not very attractive but it helps me to justify having the heat on all day.

This isn't our usual dust storm. Usually, dust storms are after Passover, not before Purim. 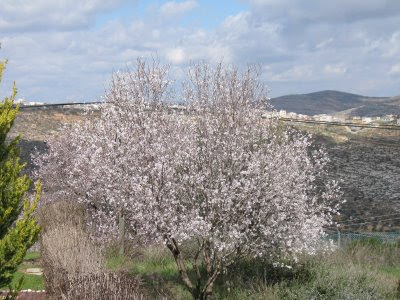 These almond trees are very pretty, filled with pale pink flowers, but the flowers are a little earlier than usual.

I was totally shocked to see our little almond tree, the Purim one, flowering a full month earlier than expected. It's always the very last almond tree to flower. Generally, it blooms on Purim, and that's in over two weeks. 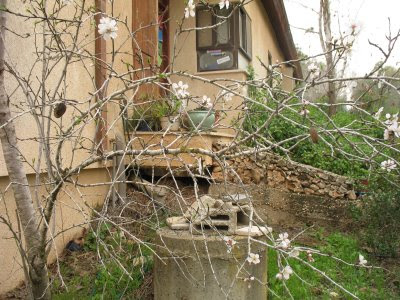 This year we've had only a very small fraction of what's considered "average rainfall." It's astonishing that the trees are blooming at all.

There's no call for water conservation. The news is just of coalition politics. How many "tikkim," cabinet portfolios will the Likud's Bibi Netanyahu give to those willing to join his government? Even the media has admitted that Tsippi Livni's 28 MK's may be more than Bibi's 27, but he has additional support, and she doesn't.

The biggest "water" news to make the media is the fact that Israel's mineral water is now contaminated. The Israeli Marie Antoinette will just order her water from Turkey, Poland or France.

There is only one thing which can reverse our water shortage, and that would be if Israel stopped toying around with supporting an Arab terror state in its heartland. No country gives away its land, so why should we?

We must make it clear that everyone must obey the law. Terrorist aren't to be freed for anything or any one.

We must stop apologizing for defending ourselves. For every kassam, we must bomb three buildings in the area from which they were launched. If the terrorists don't get the message, then we bomb five buildings. The United States didn't apologize for killing thousands when they bombed Iraq.

As soon as we make it clear that we don't care what any other country thinks, they'll stop harping and condemning.

We are the only ones who can defend us. We must not rely on anyone else, no UN, no US, no Europe!

That's the slogan on American money:

I couldn't agree more. Trust in Hashem, and the rest of the world can take a hike as far as I'm concerned.

Peace is found within our covenant with Hashem. Keep the mitzvos, trust in G-d, and then we will have peace... (and witness the redemption I assume as well!)

Pieces of paper that promise peace only lead to more Jewish lives lost. That's not what G-d wants for us. He wants us to put or faith and trust in Him.

I was actually just working on a water-related post over at my blog-- I think I'll link to your post! I claimed that conserving water is Israeli, because I have to think about saving water so much more now than when I lived in PA, but the irony is that Israelis don't really seem to care. At an intersection near us, the TOWN paid to have water sprinklers shine straight at tree trunks and parked cars-- the street was literally full of puddles in August. If that's what our gov does, what are we supposed to do??

Thanks for posting this! I'm a new blogger, so please check me out! I'll be posting about water tomorrow!

There used to be a lot more water conservation awareness here.