There's no limit to the lies people tell and people believe. I hear from those who don't travel in my neck of the woods that Arabs aren't allowed on the roads near the yishuvim. That's not true. There are many more Arabs on the roads than Jews.

For those who travel in Judea and Samaria, this is a familiar sight. 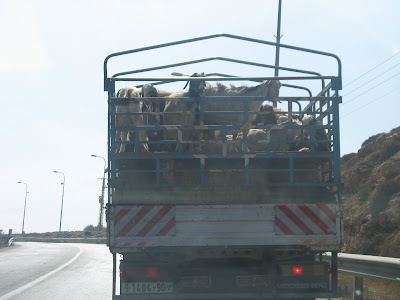 And believe me, the license plate proves it's an arab truck!

It happened occaisionally at the beginning of the war when the Arabs were taking potshots at us on all the roads in Yesha. Gradually, it was relaxed to allow public transport like Arab buses and taxis only (and then we heard how when the army would open the roads for 'civilian' cars, the Arab taxi drivers would get some terrorists to do some piguim in order to get the army to keep the roads closed and to keep their business), but mostly, the roads over the past seven years, PA Arabs have travelled on the Jewish roads while Jews are not allowed on the Arab roads.

BTW, have you ever been on the Road #458 from Rimonim to Yitav? Honestly, there are two roads in Israel that relatively very few Jews ahev ever been on; the Allon Road south of Migdalim passed Michmas, and then this 458 road. Both have spectacular biblical scenery. 458 is like driving in the mountains of Peru or the Alps - don't people know that they have this beauty so close to home?

Our road is totally open. The Alon Road is just to the east of us, though we're further north from the section you mentioned.