Not long ago, I wrote about my meeting with Adi Mintz, one of the candidates running for the job of head of Mateh Binyamin, our "regional council."

It's sort of like being governor or county head with the responsibilities of a mayor, like garbage disposal, roads, education and more. I couldn't find a map of Mateh Binyamin, but if you look at this map, you can get an idea. It's directly north of Jerusalem and includes the area including Dolev, Ramalla which is next to Beit El, Ofra and to the east of it and Shiloh and a bit further north where Eli is. It's a large district, and the roads don't connect the different communities. Administering, governing, the area isn't easy, and there are only two candidates for the position. 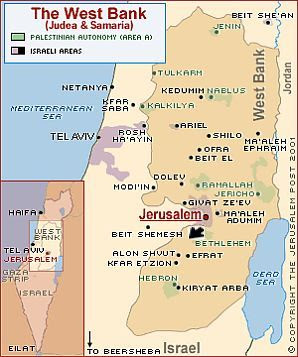 A couple of months ago, when I heard who the two candidates were, I felt that there was no choice, Tweedle Dee and Tweedle Dum. One, Adi Mintz, was tainted by his association with Moetzet YESHA and the other, Avi Ro'eh, I saw as an "establishment figure" from the present administration. And you guessed it, I'm not enamoured with the way that the council is being run any more than I respect Moetzet YESHA.

During Succot, Adi Mintz came to Shiloh, and I went to hear him and, yes, ask questions. Somethings he said were good, and others did not satisfy me at all. He claimed that "it's not the same Moetzet YESHA; there are new people on it." I think that the old ones, the ones who totally failed in the struggle against Disengagement should apologize and resign. He couldn't imagine why. Yes, that is politics and not garbage collection, but to me it's about personal judgement and taking responsibility. There were other things which impressed me, but I didn't think it right to make a decision without meeting the other candidate.

Actually, I had "met" Avi Ro'eh before, but the circumstances were very different. I had taught English to one of his sons the year his first wife was killed, when an Arab driver rammed into her car. I went to their home to pay a shiva, condolence, call.

Last night he came to Shiloh, so I decided that the time had come to find out what he had to offer us. All I knew was that he's the assistant head of the regional council, and I took for granted that it meant that he was in favor of the status quo. 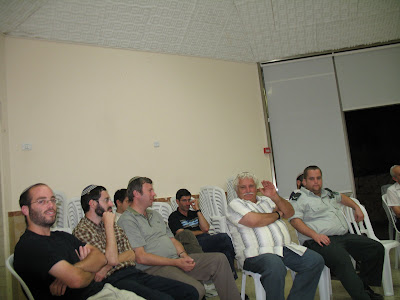 I didn't bother getting up from my seat to take the pictures, so it looks like the room was emptier than it actually was. And I didn't photograph the women sitting near me. There were many more people there than who came to hear Adi Mintz, but it wasn't Holiday time, and many were confirmed supporters, not curious like me.

Avi surprised me by starting off by saying how differently he'd be running things. That was good, and I demanded details, since I knew absolutely nothing about his way of doing things. Yes, I was impressed.

His plans for public transportation are similar to my own. Avi definitely knows what's going on in the region and is involved in important projects, projects I support. 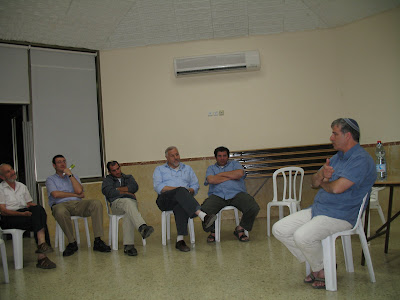 Afterwards I spoke to some neighbors for further information.

How can we make intelligent, informed, wise decisions about whom to vote for without checking out the candidates?

Yes, I do think that Avi Ro'eh will do a better job than Adi Mintz.

In league with the stones...

Every September, I recall that is more than half a century (62 years) since I landed at Nagasaki with the 2nd Marine Division in the original occupation of Japan following World War II. This time every year, I have watched and listened to the light-hearted "peaceniks" and their light-headed symbolism-without-substance of ringing bells, flying pigeons, floating candles, and sonorous chanting and I recall again that "Peace is not a cause - it is an effect."

In July, 1945, my fellow 8th RCT Marines [I was a BARman] and I returned to Saipan following the successful conclusion of the Battle of Okinawa. We were issued new equipment and replacements joined each outfit in preparation for our coming amphibious assault on the home islands of Japan.

B-29 bombing had leveled the major cities of Japan, including Kobe, Osaka, Nagoya, Yokohama, Yokosuka, and Tokyo.

We were informed we would land three Marine divisions and six Army divisions, perhaps abreast, with large reserves following us in. It was estimated that it would cost half a million casualties to subdue the Japanese homeland.

Following the 1941 sneak attack on Pearl Harbor, a Japanese admiral said, "I fear all we have done is to awaken a sleeping giant..." Indeed, they had. Not surprisingly, the atomic bomb was produced by a free people functioning in a free environment. Not surprisingly because the creative process is a natural human choice-making process and inventiveness occurs most readily where choice-making opportunities abound. America!

Tamper with a giant, indeed! Tyrants, beware: Free men are nature's pit bulls of Liberty! The Japanese learned the hard way what tyrants of any generation should know: Never start a war with a free people - you never know what they may invent!

As a newly assigned member of a U.S. Marine intelligence section, I had a unique opportunity to visit many major cities of Japan, including Tokyo and Hiroshima, within weeks of their destruction. For a full year I observed the beaches, weapons, and troops we would have assaulted had the A-bombs not been dropped. Yes, it would have been very destructive for all, but especially for the people of Japan.

When we landed in Japan, for what came to be the finest and most humane occupation of a defeated enemy in recorded history, it was with great appreciation, thanksgiving, and praise for the atomic bomb team, including the aircrew of the Enola Gay. A half million American homes had been spared the Gold Star flag, including, I'm sure, my own.

Whenever I hear the apologists expressing guilt and shame for A-bombing and ending the war Japan had started (they ignore the cause-effect relation between Pearl Harbor and Nagasaki), I have noted that neither the effete critics nor the puff-adder politicians are among us in the assault landing-craft or the stinking rice paddies of their suggested alternative, "conventional" warfare. Stammering reluctance is obvious and continuous, but they do love to pontificate about the Rights that others, and the Bomb, have bought and preserved for them.

The vanities of ignorance and camouflaged cowardice abound as license for the assertion of virtuous "rights" purchased by the blood of others - those others who have borne the burden and physical expense of Rights whining apologists so casually and self-righteously claim.

At best, these fakers manifest a profound and cryptic ignorance of causal relations, myopic perception, and dull I.Q. At worst, there is a word and description in The Constitution defining those who love the enemy more than they love their own countrymen and their own posterity. Every Yankee Doodle Dandy knows what that word is.

In 1945, America was the only nation in the world with the Bomb and it behaved responsibly and respectfully. It remained so until two among us betrayed it to the Kremlin. Still, this American weapon system has been the prime deterrent to earth's latest model world- tyranny: Seventy years of Soviet collectivist definition, coercion, and domination of individual human beings.

The message is this: Trust Freedom. Remember, tyrants never learn. The restriction of Freedom is the limitation of human choice, and choice is the fulcrum-point of the creative process in human affairs. As earth's choicemaker, it is our human identity on nature's beautiful blue planet and the natural premise of man's free institutions, environments, and respectful relations with one another. Made in the image of our Creator, free men choose, create, and progress - or die.

Free men should not fear the moon-god-crowd oppressor nor choose any of his ways. Recall with a confident Job and a victorious David, "Know ye not that you are in league with the stones of the field?"

Thank you so much for the very interesting and informative comment. I really enjoyed reading it.