I know it's after 1am, hours after my bedtime.

Our regional council is having elections pretty soon. There are two candidates, Avi Ro'eh and Adi Mintz. Until tonight I didn't know too much about them. Actually I referred to them as "pretty much the same, Tweedle dum and Tweedle dee." Ro'eh works in the council, and Mintz used to head Moetzet YESHA. That means a black strike for both.

Tonight Adi Mintz came to Shiloh. He does have some good ideas and stressed that he hasn't worked for Moetzet YESHA for a few years. He's also willing to listen and kept telling his assistant to write down things I said. I wish my students would do that.

Of course, I "argued" with him over a few things and suggested lots of other things and informed him of things he wasn't yet aware...

And I no longer consider the two candidates "the same." 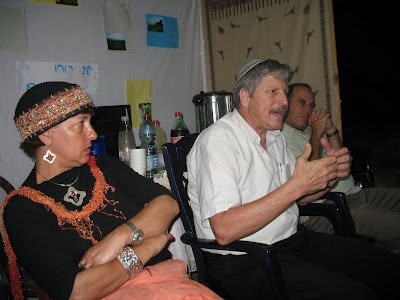