It looks pretty dumb, doesn't it?

Actually, when I googled for a picture of a cat catching his tail, I was hoping to see something more "active." 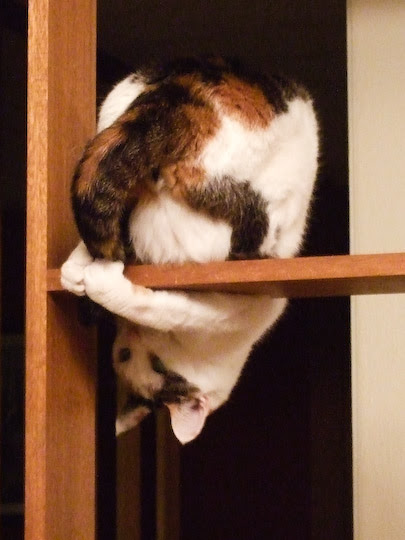 Israeli politicians are like cats trying to catch their tails. They are the antithesis, the exact opposite of what true leaders really are.
Last night's hate-filled TV eulogies of Yitzchak Rabin revealed more of his underlying rationale for Oslo. Believe me, Olmert's not the first tired Israeli politician. Yitzchak Rabin was also tired. One of his confidants, sorry, but I forget who was talking, explained that during the Gulf War of US President Bush The First, Rabin was depressed by the sight of cars streaming out of Tel Aviv. He looked at those Israelis fleeing their homes and knew that they were his kind of people, the ones whose votes he wanted. That's why he liked the Oslo Accords. It suited Israelis who had no problem fleeing their homes. Even better, those Israelis got to keep their homes, while the patriotic Land of Israel loving Israelis would, G-d forbid, be exiled from theirs.
Yes, instead of offering leadership and encouragement to the Israeli citizens, Rabin packaged a plan based on the worst and weakest of the Israeli psyche.
True to form, Rabin never apologized for his violence against fellow Jews during the Israeli War of Independence. He was a dedicated follower of Ben Gurion who feared competition for leadership and ordered Menachem Begin to be killed when the Altalena tried to dock to deliver fighters and arms to free the Old City of Jerusalem. Yitzchak Rabin was the commander of the Palmach unit which attacked the Altalena and killed their fellow Jews, Hashem Yikom Damom, May G-d Avenge Their Deaths.

Israel needs to move forward, not backward. The current administration is moving Israel backward and causing us to be more and more vulnerable. This must stop, Olmert and Kadima must go, and we need to bring Bibi back!

menorah, you're right
yehudi, I doubt if bibi's the guy
He aims to be moderate, center
Kahaneh wouldn't trust him for sure.

Bibi already had his chance, remember? And Oslo kept on keeping on, the murderers of Jewish babies still control the high ground in Chevron, and our brother Jonathan still rots in an American jail --- why, why, Wye?

unfortunately very true
thanks for commenting