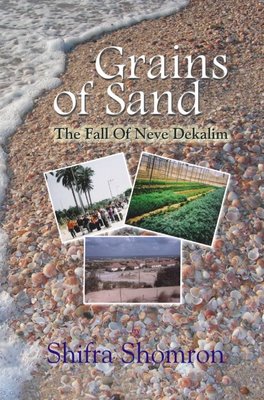 Yes, that's the right title to this post, "A Novel Novel."

"Novel" is one of those words which is both a noun and an adjective.

On this past Shabbat (yesterday,) the first long Sabbath afternoon of Day Light Savings Time, I read a new novel, Grains Of Sand: The Fall Of Neve Dekalim, by Shifra Shomron.

Now, where should I start?

I'm not totally objective about it, and it's not just the political view point.

For years I've been complaining that there isn't any home-grown literature coming out of the "settlement movement." There should be. There's talent here for sure and stories abound in such quantity and variety, with just the right humor, conflict and suspense.

A few years ago, a neighbor of mine, Yoel Ben Avraham, tried to do some hasbara for YESHA. He ran the blog/site YESHA Speaks Out, which unfortunately he later closed down. But in its "heyday" it had an essay contest for Israeli students, which I helped with. They were to write about their homes, since we wanted to get the world to see the truth about life in YESHA.

That's when we discovered the very talented Shifra Shomron. I was doubly excited, since Shifra and her family had lived in Shiloh for about a year, when she was a very young child, and I knew her family.

Over the years since they had left Shiloh, we had kept up minimal contact, and I was glad that they found their true home in Neve Dekalim. Shiloh just wasn't the "right fit" for them. I had no doubt that Disengagement would be extremely difficult for them. Along with all the thousands who read the articles on YSO, I kept up with the saga of the Shomron family, written by Shifra, as they dealt with the cruel blows of the upcoming exile brought by the Israeli Government's Disengagement policy.

Shifra was still a teenager when she wrote her novel novel, a very impressive debut. I learned a lot by reading it. My vantage in Shiloh was far from Gush Katif; though I consider my home to be in danger as a result. And no surprise to me, when Ehud Olmert announced that he was planning on exiling most Israeli Jews from Judea and Samaria, including from Shiloh. He hasn't given up on his evil plans.

Shifra's book should give people a better idea of what life is really like in the yishuvim. I hope she's writing a sequal, since life in exile mustn't be hidden.

It pains me to compare the novel's main character's graduation from high school to my own. Efrat realized that the Israeli government was enthusiastically planning to destroy her idyllic home and community in Gush Katif At my high school graduation we basked in Israel's fruitful 1967 victory over the Arab states which were determined to destroy us.
Posted by Batya at 12:24:00 PM

Hi Batya,
The publisher is Chaim Mazo, publisher@mazopublishers.com
in Israel:
cost 69.NIS + 6 NIS (postage + handling)per book
in USA:
$16.95 + $6 (postage + handling) per book
"Grains Of Sand: The Fall Of Neve Dekalilm" is
available from the publisher, Amazon, Barnes and Noble...
Shifra does have a limited number of copies of her book that she can autograph as well nevedekalim@yahoo.com
Please visit her website: www.geocities.com/nevedekalim for more information
Chag Kasher v'Sameach!
Sara Layah

thanks for the info

I have been interested in following the news about ISRAEL
for several years and have been impressed by the actions of
its government to the assaults upon its citizens which seemed
to be almost a nonaction. while professing anger and often threatening severe responses. I can’t imagine our government tolerating this situation for a day but ISRAEL was only threatening terrible responses while doing almost nothing.

For several months, maybe a few years, news reports have
indicated that some citizens of Israel living in cities that
were under frequent attack which caused not only damage
to buildings but also to injuries, even death, to its peoplewere calling for much more vigorous responses to end theseattacks. More recently it seemed that the government only
attacked those who were under attack by Israel’s neighbors.
This seemed impossible but people were being jailed for
complaining. More recently I had heard that some people
who were seemingly under this combined attack (by their
government and neighboring peoples) were agitating more
loudly in the hope that other people in ISRAEL who were
living in more secure areas would become more interested
in the lives of those under frequent attack and that this
book, GRAINS OF SAND: THE FALL OF NEVE DEKALIM, written by an English speaking citizen of ISRAEL would more clearly describe the situation.

Having now read this book I am appalled at the conditions
that they had faced for months, even years, and don’t
understand why this continues. Our government (USA) seems
to have much influence in the middle east but has not
able to bring peace to the region. Maybe books like this one will help. It is very clearly written, is very descriptive, sometimes reads like poetry. I highly recommend it and
thank you for letting me comment about it.

"...Dear reader, gaze carefully at my tapestry, stare with wonder and respect, touch gently and gingerly. Because it tells the tale of a vibrant community now smashed to gray piles of rubble. Because it tells the tale of people whose flowers were picked, whose saplings were hewn and, in the end, whose roots were cruelly ripped out.
Because Neve Dekalim has fallen."
Shifra Shomron,
Author's Note


Grains Of Sand: The Fall Of Neve Dekalim
by Shifra Shomron

Shifra, I hope you're working on a sequal!