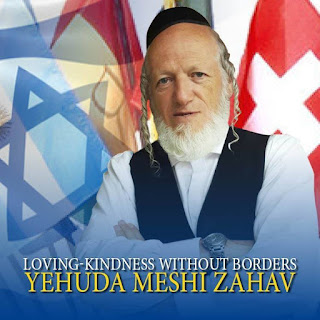 Somehow I can never forget the old articles and news about the then young Yehuda Meshi-Zahav's violent anti-Zionist/State of Israel shenanigans. He was the "poster boy" for the most extreme of the chareidi anti-Zionist camp. As a youngster he proved himself a charismatic headline grabber.

Honestly, I'm not sure at all when things changed with him, but at some point his focus, point of view did change drastically.

Meshi-Zahav and friends began to concentrate on an important Mitzvah, Torah Commandment, to collect "body parts" of Jews who had been murdered or injured in Terror attacks and accidents. According to Jewish Law, parts of a human body must be ritually buried. The first aide responders care for the injured and don't have the time and manpower to properly "clear" the scene. That's where Meshi-Zahav and his crew first came in. They filled that crucial vacuum with ZAKA.

It's said that a mitzvah brings on more mitzvot, and maybe that is what happened with Yehuda Meshi-Zahav. By spearheading the great mitzvah of properly caring for the human body, he began to appreciate the Jewish State of Israel and the broad spectrum of the Jewish People and other Israeli citizens. Today Yehuda Meshi-Zahav is a proud, loyal and patriotic Israel, along with being a strictly Torah observant Jew, and he doesn't see a contradiction between the two. In my book, that makes him a BT Baal Teshuva, or Chozer b'teshuva. Judaism, unlike any other religion, is one of simultaneous nationalism in Gd given Land, plus religious ritual and belief in our One Gd. Being truly Jewish is very complex.

The latest ZAKA newsletter has a wonderful letter/message by Meshi-Zahav, which I recommend reading:

When I was young, I would join the demonstrations you led against Shabbat desecrations and any other issue. For me, you were the epitome of the general, a leader and a fearless, uncompromising fighter for the principles of Judaism. We grew up with your stories of heroism, like the time you put your head in the Edison Cinema ticket window in Jerusalem to prevent desecration of the Shabbat, and you were beaten with clubs until you lost consciousness.

From you, we heard again and again about the great danger inherent in the Zionist state, to the extent that you would ask to cross the border to the protection of the Kingdom of Jordan. We heard about the decrees of annihilation of the Zionist regime, whose sole purpose was to rid the Jewish people of its religion and faith. We heard your warnings that within a few years there would be no remnant or refugee surviving from the people of Israel. You taught me about the importance of separating ourselves from everything that is part of the Zionist regime, not to take any money from the state, and that anyone who participates in the elections is effectively indulging in idol worship. You said in public forums that the Zionists were to blame for all the troubles of the people of Israel, including the Shoah itself...
...Today, after 70 years of a Zionist state, I am pleased to inform you, my dear uncle, that your fears were groundless: we have a wonderful, amazing Jewish-Zionist state that serves as a model for the entire world. A state that is blossoming in almost every sphere - education, economy, health, immigrant absorption, and Judaism itself. About 7 million Jews - over fifty percent of the Jewish people - live in the State of Israel, and in Jerusalem alone we are approaching one million residents, which probably was not the case even during Temple times.

Who would have believed that, 73 years after the Shoah, when the people of Israel were almost annihilated and there was hardly any trace of Torah and Hasidism, we would have a Jewish state of our own. A state in which the world of Torah would reach a level unparalleled in the history of the Jewish people. Since King Hezekiah, there has not been as much Torah study in the Land of Israel as it is today, and you will be surprised to hear that the “Zionist regime” is the greatest supporter of Torah education in the world, investing billions of shekels...
...My uncle, if you were able to open your eyes today, you would see that in the “Zionist state of destruction”, 73% light Chanukah candles, 78% fast on Yom Kippur, and over 200,000 people take part in Selichot prayers at the Western Wall. How hard you had to fight so that every road in the ultra-Orthodox neighborhoods would be closed on Shabbat. On the 70th anniversary of the Zionist state, there are seven cities led by Haredi representatives, where the roads are closed on Shabbat and holiday, as well as in other cities with large Haredi...
...Rest in peace, my dear uncle Rabbi Amram. There is no need to fight anymore. Although your generation may have feared the Zionist state, 70 years later it has been proven that the State of Israel, with God’s help, is the savior and protector of the people of Israel, and this is indeed the safest and best place to live as a Torah observant Jew...
For the complete article, click here.

Anti-Zionist Chareidim have something
in common with anti-Zionist Muslims:

Both of them are living in the past.

Anti-Zionist Muslims are living with Mohamed
14 centuries ago, and the anti-Zionist
Chareidim are living in the past
of one century ago, when whether-or-not-to-
create-a-Jewish-State was still a serious question.

BOTTOM LINE: Jews and Muslims should stop living in the past.

I don't expect anything good from the muslims, but it's important for Jews to accept, support and even want to improve the State of Israel. Just criticizing isn't good. And it certainly won't make things better. That's a message that Yehuda Meshi-Zahav has learned.